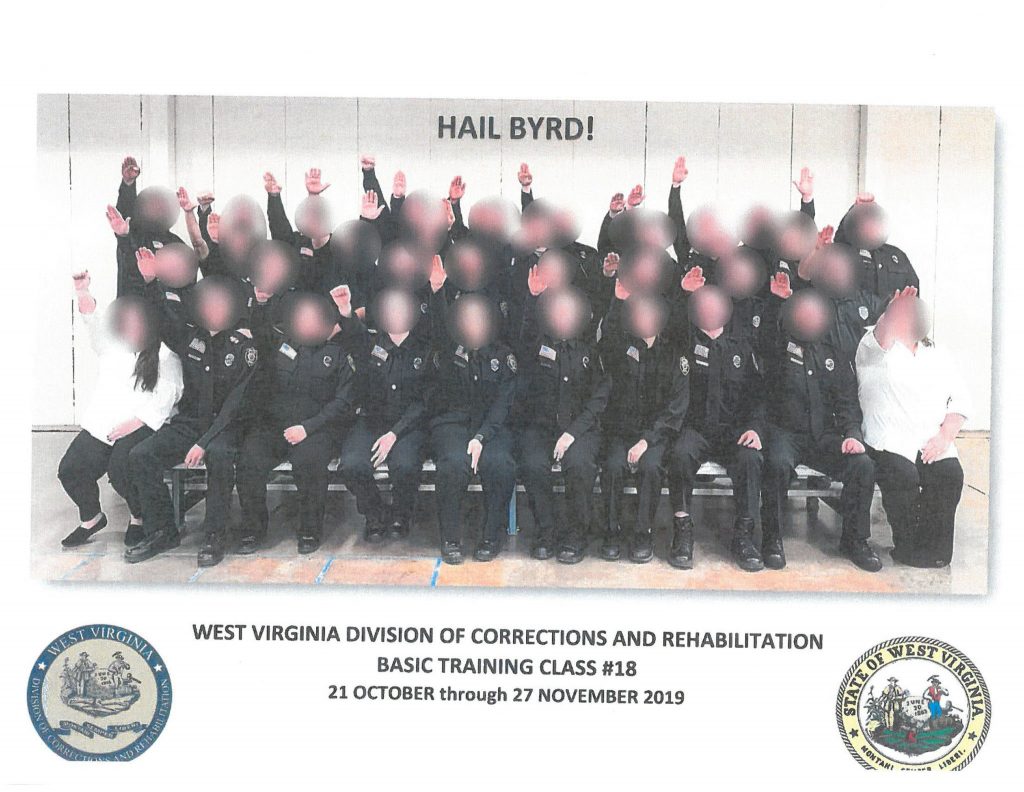 This is a photo from a West Virginia Department of Military Affairs and Public Safety basic training program. And the you-know-what has hit the fan!

On Friday, the Department announced that everyone in the photo, captioned “Hail Byrd!”, had been disciplined. The Department fired two correctional academy trainers and one of the basic training class cadets. The Department suspended the other 34 trainees in the picture without pay. However, the Department’s  Division of Corrections and Rehabilitation (DCR) policy does allow the suspended trainees to apply any earned annual leave during such a suspension.

The Michael Levenson from the New York Times reports here that West Virginia Governor Jim Justice has “ordered the termination of all those that are found to be involved in this conduct.” Meanwhile, WV Senator Joe Manchin III agreed that all participants “should be removed from their position immediately.”

While the picture is worth a 1000 words — starting with “you anti-Semitic creeps” — the Department did investigate before disciplining. According to this release, investigators have conducted more than 50 interviews, with leadership teams reviewing the statements and other evidence throughout the investigation. The investigation is still ongoing.

In addition to taking this matter seriously, and investigating promptly, the Department checked another best practices box by immediately issuing a statement condemning the photo. In that statement, the Department also confirmed that it was working with local faith leaders not only to address the situation but also to help recommend changes or additions to its training programs.

Many of you view this incident as something that would never happen in your workplace. And some of you are clutching your pearls. Either way, if you read this blog on the regular, you know that something like it could start your business on a trajectory for the newspaper headlines.

Therefore, while taking the incident seriously is important, remove the blinders too and considering the broader impact that this type of behavior could have on your employees and your business in general. In certain situations, you may need to issue a statement condemning the behavior. And it’s important that you do it right the first time. Just ask the Houston Astros.

Also, consider getting some outside help from someone beyond your lawyer. Did I just say that out loud? Yes, I guess so. Sometimes, it may be necessary to consult with local religious or other anti-discrimination organizations.

Ultimately, it’s not only important to take reasonable steps to avoid a repeat performance of the bad employee behavior but also to mitigate the risk of long-lasting (or permanent) damage to your company’s brand and reputation.