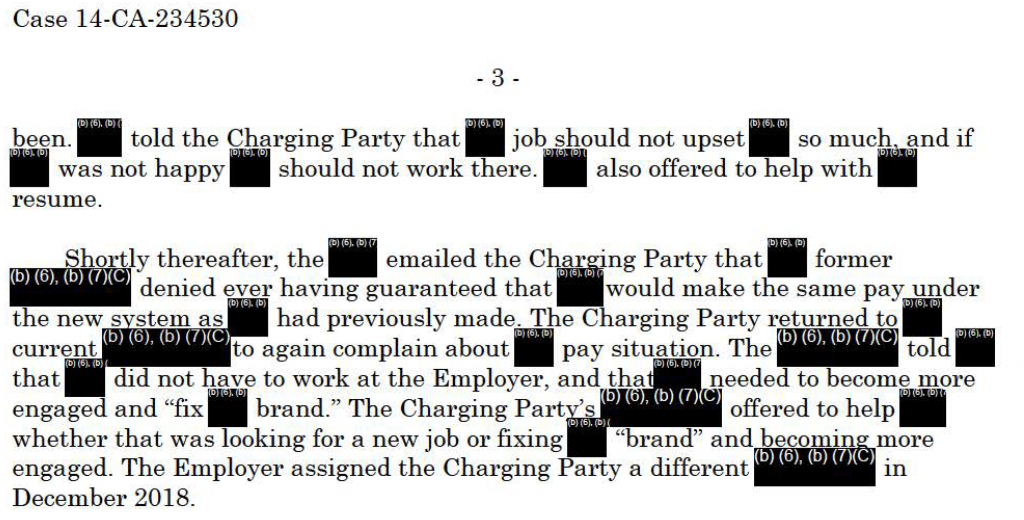 At first glance, this recent National Labor Relations Board General Counsel Advice Memorandum, with all its redactions and such, seems hardly worth the trouble to parse through.

But, that’s why they pay me bupkis to blog and try to make something out of nothing. And I’ve done just that for you today.

This Advice Memo describes a situation involving a Charging Party named ‘Redacted”, I suppose. And Redacted was a bit of a pain in the you-know-what. You see, back in December 2017, Redacted’s employer converted Redacted and a bunch of his co-workers from exempt employees under the Fair Labor Standards Act to non-exempt. In doing so, the company also cut their salary, but represented that with the overtime they would earn, the end result would be about a wash.

Redacted was not cool with this at all.

So, he complained to co-workers, managers, other redacted employees, and anyone who wouldn’t tell him to STHU. On and on this went until, eventually, the company had enough and fired him. At least, I think that’s what the Advice Memo says.

The FLSA contains an anti-retaliation provision that protects employees from adverse employment action for complaining about not receiving minimum wage or overtime. But, that’s not what is going on here. Not only is a company allowed to convert exempt employees to non-exempt but, in doing so, it created overtime opportunities.

So, in this particular case, the NLRB General Counsel concluded that Redacted engaged in protected concerted activity when he kept carrying on (and tried to enlist others to complain) about how it stunk for him and others like him to go from exempt to non-exempt. Then, when the company ended Redacted’s employment for engaging in protected concerted activity, it violated the NLRA.

Tread carefully before you decide to cut ties with employees that gripe about their pay.