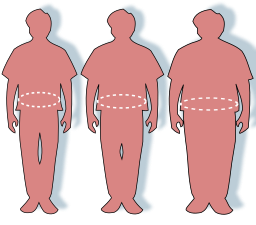 Last night, I read this recent Seventh Circuit opinion about a man who applied for a job with a railroad.

The job required some fairly physical work; namely, climbing and working on and around heavy equipment. The company’s policy was not to hire anyone with a BMI of 40 or greater because of the “substantially higher risk of developing certain conditions like sleep apnea, diabetes, and heart disease and the unpredictable onset of those conditions can result in sudden incapacitation.” Given the job requirements, this could create an unsafe workplace. So, the company told the applicant that he was welcome to reapply later if he lost the weight and kept it off.

Instead, the applicant sued, alleging a violation of the Americans with Disabilities Act.

The question for the Seventh Circuit to answer was whether “the likelihood that an employee will develop a future disability [is] within the scope of the ADA.”

(Obesity itself, without any other physically-limiting conditions, is not a ‘disability’ under the ADA).

“But, Eric, didn’t you blog about this recently?”

Gold star for you! Come by the Bloggerdome tonight for some extra Reese’s cups.

A few weeks ago, I blogged here about how an employer did not violate the ADA’s ‘regarded as’ provision when it told a healthy employee that she would be fired if she traveled to Ghana. (The owner was concerned that, if the employee when to Ghana, she would contract Ebola and spread it at work.)

“Eric, you also blogged about this a few years ago, didn’t you?”

In 2016, the Eighth Circuit Court of Appeals reached the same conclusion. The Eighth Circuit concluded that any employer may rescind offers made to applicants whom an employer believes may develop a disability in the future (e.g., obese individuals who lack any other current physical impairment).

Yep, another win for the railroad.

That’s because the ADA’s “regarded as” prong defines “disability” as “being regarded as having [a physical or mental] impairment.” (my emphasis). And the Seventh Circuit concluded that “‘[h]aving’ means presently and continuously. It does not include something in the past that has ended or something yet to come.”

In other words, an employer does not regard someone as having a disability if it is concerned that this non-disabled person may later develop a disability.

Does this mean that you can fire all of the overweight people at work?

For starters, you’re not a jerk.

But, consider also that weight gain may be a symptom of another underlying current disability, in which case you may be facing a much stronger ADA claim.