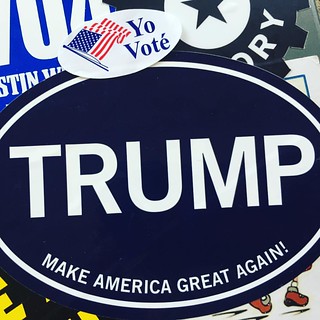 Back in 2016, Kathleen M. Jungclaus was the full-time Vice President of Human Resources for a Pennsylvania continuing care retirement community. She had worked for the company since 2007.

On July 24, 2016, Ms. Junclaus went on her personal Twitter page and tweeted: “@realDonaldTrump I am the VP of HR in a comp outside of philly [sic] an informal survey of our employees shows 100% AA employees voting Trump!”

A little over two months later, Ms. Junclaus found herself unemployed and applying for benefits.

Ayo, before I finish telling this story, you should probably check out yesterday’s post ICYMI. #EmploymentLawNerdBrigade

[Employer] has an interest in promoting and protecting its reputation[,] as well as the dignity, respect, and confidentiality of its residents, clients, and employees as depicted in social media, whether through [Employer’s] own postings or that of others. Towards that end, [Employer] will actively manage the content of its social media sites to uphold the mission and values of the company. Also, [Employer] expects employees who identify themselves with [Employer] in either internal or external social media to conduct themselves according to this policy.

Initially, the employee had her benefits claim granted, then denied, and then granted again.

Connect the what now?

On appeal to the Commonwealth Court, the employer argued that its social media policy permitted it to terminate an employee, like Ms. Junclaus, for her “racially charged” post. The employer reasoned that a simple connecting of the dots would allow someone who viewed Ms. Junclaus’s tweet to conclude that she was impugning the company. According to the opinion, here’s how: “According to Employer, Claimant readily identified herself with Employer. Claimant identified herself as a vice president of human resources of a company located outside of Philadelphia. Claimant follows Employer’s Twitter feed. A Google search of Claimant’s name or Employer’s directory would quickly link the two together.”

I’m all for creative arguments, but this one. Ummm….

Indeed, the record showed that Ms. Junclaus identified herself as a vice president of human resources of an unnamed company located outside of Philadelphia. And, although Ms. Junclaus followed her employer on Twitter, she didn’t identify herself as an employee of the company. Her Twitter account wasn’t “linked” to the employer’s Twitter page or website.

But, that’s not all. The employer argued that, beyond its social media policy,  Ms. Junclaus violated its Communications Policy by linking to the employer’s website. However, the Commonwealth Court set the employer straight on this issue:

Employer failed to prove that Claimant violated its Communications Policy, which provides that employees may not “link from a personal blog or social networking site to [Employer’s] internal or external website.” The Board’s finding that Claimant merely “follows” Employer’s Twitter account is supported by the evidence. Employer did not prove that Claimant had a “link” to Employer’s website on her social media page. Consequently, Employer would not prevail on this claim.

Now, what was so racially charged about this post?

Finally, the employer argued that Ms. Junclaus’s tweet confirms that she acted inappropriately at the workplace by conducting an informal survey, in which she “singled out African-American staff and asked them their political preferences.”

The moral of this story is that you can fire just about anyone for just about anything or nothing at all. That’s at-will employment for you. Just remember, that unless you have the former employee nailed for violating a company policy, it’s really tough to prevail when contesting an application for unemployment compensation.