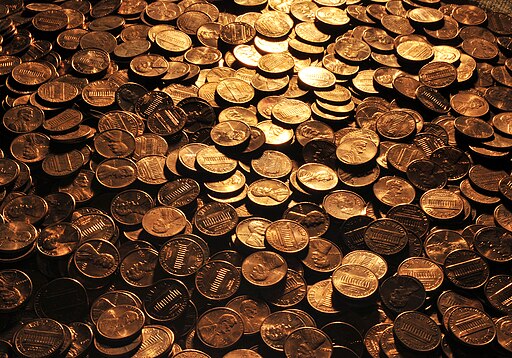 If this isn’t karma, friends, I don’t know what is.

Hold for a sec.

Before blogging about the height of passive-aggressive behavior backfiring, let me click “refresh” on the Supreme Court’s website to see if we have a decision in the OSHA ETS case.

Well, good luck with that, folks. Give a holler if OSHA darkens your door today.

Our story takes us back to January 26, 2021. That’s when, according to the U.S. Department of Labor (DOL), a former employee of a Georgia auto repair shop called the DOL’s Wage and Hour Division (WHD) to report that his former employer had failed to pay him his last paycheck.

Supposedly, the shop owner stated, “How can you make this guy realize what a disgusting example of a human being he is …. [Y]ou know what? I’ve got plenty of pennies; I’ll use them.”

So, on March 12, 2021, the company allegedly delivered about 91,500 oily pennies onto the former employee’s driveway. On top of the penny pile was a copy of the final paycheck with an expletive written on the outside.

The DOL claims that the mountain of pennies blocked and stained the worker’s driveway, requiring nearly seven hours for him to remove. To boot, the DOL further alleges that the company published defamatory statements about the former employee on the company’s website.

Not paying a final paycheck on time violates the Fair Labor Standards Act. The bigger problem is that when the WHD gets involved, it may want to conduct a broader wage-and-hour audit, which is exactly what happened here. The WHD also determined that the company violated the FLSA’s overtime provisions by paying other employees straight time for all hours worked. (Non-exempt employees working more than 40 hours per week must receive overtime at time-and-a-half.) In addition, the company also failed to keep adequate and accurate records of employees’ pay rates and work hours.

So, the DOL sued the company and its owner for these wage-and-hour violations, plus retaliation, because…duh!

(The FLSA’s definition of “employer” includes any person acting directly or indirectly in the interest of an employer in relation to an employee.)

If in a bout of passive-aggression, you’re going to terminate a problem employee, here’s what you need to do.

First, make sure that your business otherwise operates within the lines of the FLSA. Then, deliver the final paycheck in pennies on the first scheduled payday following termination (or earlier, if state law requires). Since you’ve paid the employee in full before s/he complains to the DOL, there can be no retaliation claim.