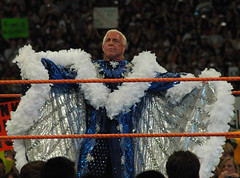 On behalf of an illiterate man, the United States Equal Employment Opportunity Commission (EEOC) investigated a Charge of Discrimination against a MD employer, which allegedly had a literacy policy that violated the Americans with Disabilities Act (by discriminating against qualified individuals with learning disabilities). As part of its investigation, the EEOC served an extremely broad subpoena on the employer. The employer fought the subpoena hard. Ultimately; however, it learned that the EEOC has the power.

How much power does the EEOC have? According to the Fourth Circuit Court of Appeals, in a case decided last week, once it receives a Charge of Discrimination, the EEOC may access “virtually any material that might cast light on the allegations against the employer.”

Damn! That’s broad. That’s woooooooo broad! [Ed. note: Yes, I realize that Ric Flair is from North Carolina, not Maryland. However, both are in the Fourth Circuit. Wooooooo!]

The Fourth Circuit broke down just how broad that power is:

Congress has delegated to the EEOC the authority to investigate charges of discrimination, and naturally the agency has developed expertise in that area. In this and other areas, where an agency is tasked with investigation, we defer to an agency’s own appraisal of what is relevant so long as it is not obviously wrong. Accordingly, although we must be careful not to render the relevance requirement a nullity, it is not especially constraining…precisely because we largely defer to the EEOC’s expertise.

So, next time you get the EEOC subpoena, remember Ric Flair this blog post and recognize that you may be in for more pain than the recipient of a figure-four leg lock.

Disclaimer: I am an EEOC mediator.