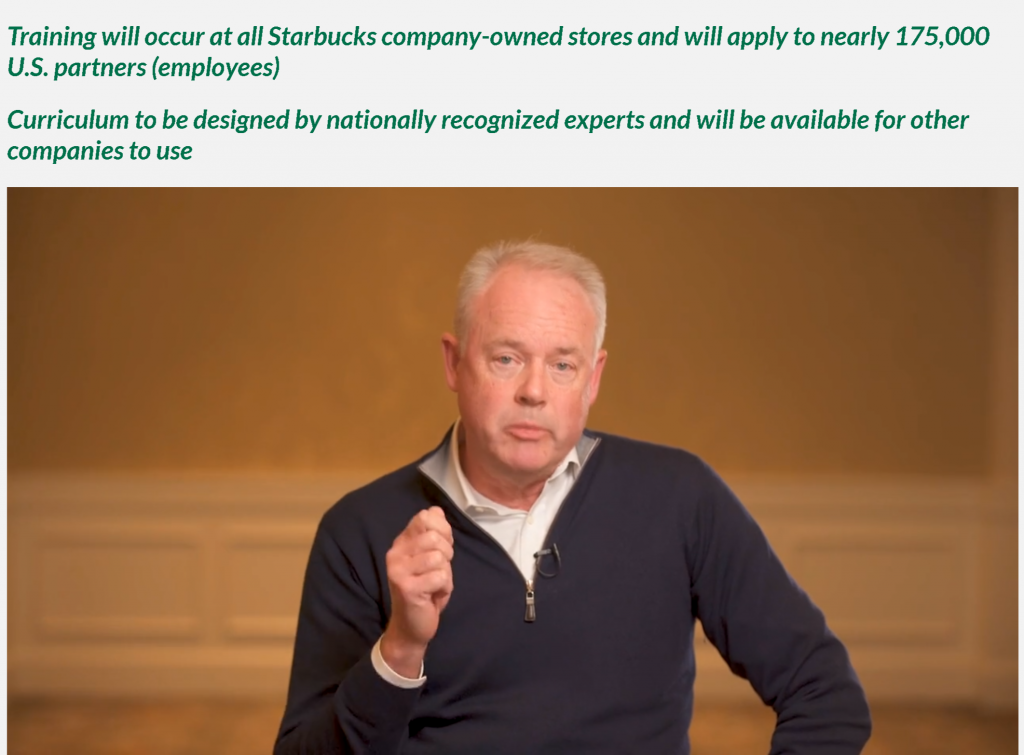 In a video posted on the company’s website, Starbucks CEO Kevin Johnson followed up his initial apology for last week’s incident in Philadelphia with additional details on how the company would try to avoid a similar event in the future.

Starbucks Coffee Company (NASDAQ: SBUX) today announced it will be closing its more than 8,000 company-owned stores in the United States on the afternoon of May 29 to conduct racial-bias education geared toward preventing discrimination in our stores. The training will be provided to nearly 175,000 partners (employees) across the country, and will become part of the onboarding process for new partners.

All Starbucks company-owned retail stores and corporate offices will be closed in the afternoon of Tuesday, May 29. During that time, partners will go through a training program designed to address implicit bias, promote conscious inclusion, prevent discrimination and ensure everyone inside a Starbucks store feels safe and welcome.

In Mr. Johnson’s follow-up video and the company’s announcement, Starbucks identified a who’s who of thought leaders upon whom the company would rely to develop the training:

The curriculum will be developed with guidance from several national and local experts confronting racial bias, including Bryan Stevenson, founder and executive director of the Equal Justice Initiative; Sherrilyn Ifill, president and director-counsel of the NAACP Legal Defense and Education Fund;  Heather McGhee, president of Demos; former U.S. Attorney General Eric Holder; and Jonathan Greenblatt, ceo of the Anti-Defamation League. Starbucks will involve these experts in monitoring and reviewing the effectiveness of the measures we undertake.

If you’re interested in learning more about the training module, you may be in luck. Starbucks announced that “the company will make the education materials available to other companies, including our licensee partners, for use with their employees and leadership.”

If you have a connection at Starbucks who can facilitate, and you wouldn’t mind making an introduction for me, please email me.