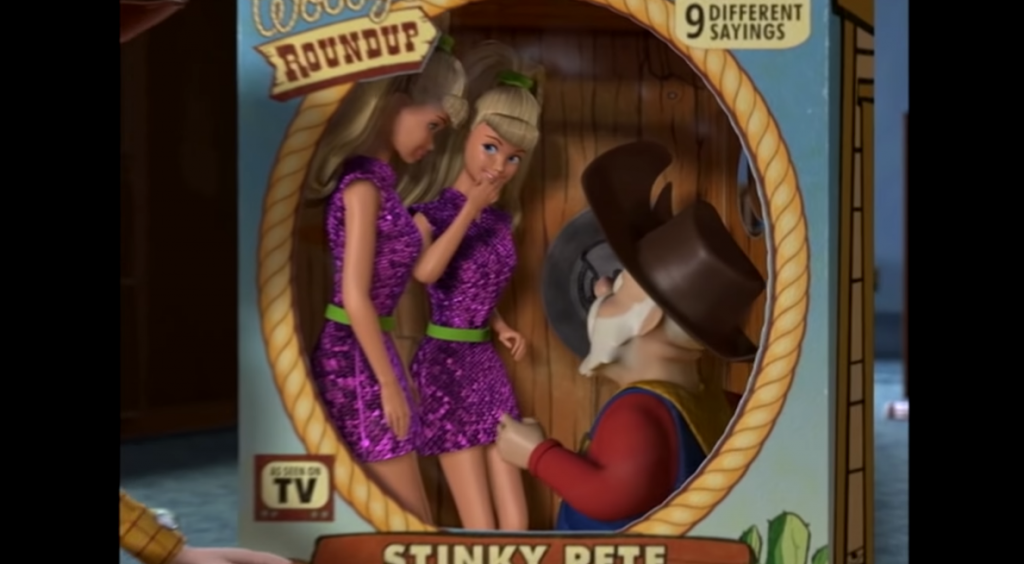 But, if you purchase Toy Story 2, you’ll no longer find the “blooper reel” scene where Stinky Pete promises two Barbie Twins a role in Toy Story 3.

I’ve got more on this story from Rob Picheta reporting here at CNN.com:

The scene appeared as one of the “bloopers” at the end of the animated sequel, which was first released in 1999 and became a huge moneymaker for Pixar and Disney.

It features the character Stinky Pete making sexually suggestive comments to a pair of Barbie dolls, before realizing he is on camera and awkwardly ending the conversation. All four “Toy Story” films have included faux blooper reels during the closing credits.

If this all sounds a little #MeToo to you, well, it should.

Allegra Frank reporting here at Vox.com reports that the problems for Disney/Pixar run deeper than this blooper reel:

It’s especially discomforting in the context of Pixar’s own #MeToo problem. John Lasseter, the former CEO of both Pixar and Walt Disney Animation Studios, left the company in 2018 following numerous allegations of sexual misconduct. These allegations included unwanted physical contact with female employees and repression of minority voices, leading to the departure of original Toy Story 4 scribes Will McCormack and Rashida Jones in November 2017. (Jones later said that their decision to leave was influenced by Pixar’s institutional issues with diversity, not because Lasseter made any advances toward her.)

The ‘Stinky Pete’ scene was aimed at parents, not kids. And, back in 1999, we may have laughed at it.

But, we’ve come a long way in twenty years.

Heck, we’ve really progressed in the past few years since the #MeToo movement began.

Heads of movies studios and other business leaders who engage in sexual misconduct or other similar unacceptable behavior are being held accountable. Pulling a ‘Stinky Pete’ in the workplace — we call that quid pro quo harassment — is easily a terminable offense.

Even joking about it at work is grounds for discipline.

Twenty years ago we may have laughed. Now, it’s not funny at all. It’s creepy and it’s wrong.