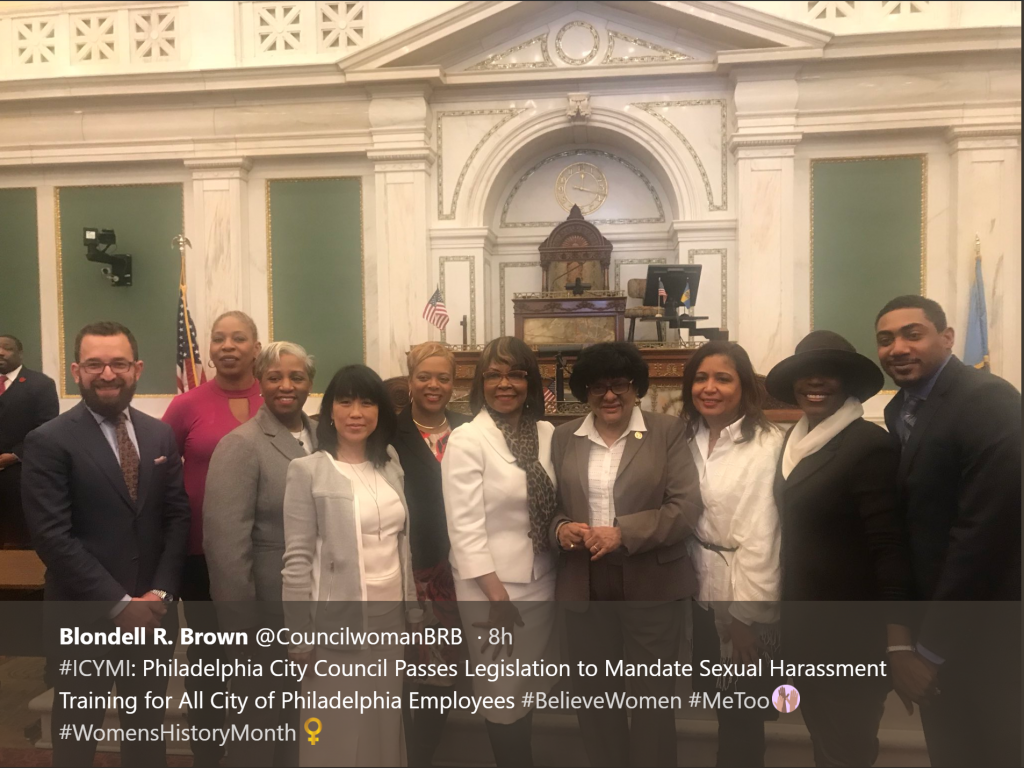 Now, it’s up to the voters.

Yesterday, on International Women’s Day, Philadelphia City Council passed a bill that will require the City to provide sexual-harassment training to all of its employees and officers.

In May, when City residents go to the polls, they will decide whether to amend the Home Rule Charter to require this annual training.

(Who is that bearded man with them?) 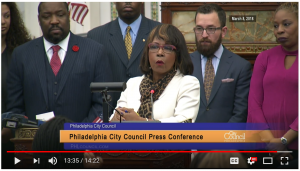 “This legislation is a significant step in the right direction to ensure that the City of Philadelphia is fostering a workplace environment free of sexual harassment,” said Councilwoman Reynolds Brown. “All employees deserve to work in an environment that works against gender stereotypes, empowers bystanders, encourages civility, requires serious training, promotes women, encourages reporting, and implements proportional consequences for negative behaviors and offenses.”

Now, you may be thinking to yourself, “Why haven’t City employees received prior anti-harassment training? They have. Indeed, I have trained the First Judicial District consistent with City policies and procedures. But, policies and procedures that require training are one thing. Requiring training by the force of law takes it to another level.

Consider the guidance from the U.S. Equal Employment Opportunity Commission:

Workplace culture has the greatest impact on allowing harassment to flourish, or conversely, in preventing harassment. The importance of leadership cannot be overstated – effective harassment prevention efforts, and workplace culture in which harassment is not tolerated, must start with and involve the highest level of management of the company.

Here, leadership by their words and their acts is sending the strongest of messages that sexual harassment is not going to be part of working for the City of Philadelphia.

But, it doesn’t end there.

As I told City Council when I testified a few weeks ago, “[w]hat must follow is a holistic approach that includes “buy-in” at all levels. The City must create systems to ‘foster an organizational culture in which harassment is not tolerated, and in which respect and civility are promoted.'”

Indeed, the City has a task force that is addressing these issues in anticipation of the May ballot. That “Yes or No” ballot question in May will read as follows, “Shall the Philadelphia Home Rule Charter be amended to provide for mandatory annual training for all City officers and employees regarding sexual harassment in the workplace?”

I expect the voters to respond with an emphatic yes.

But there’s still plenty of work left to do.  Speaking of which, I have to start packing for the SHRM Legislative Conference in Washington, DC, where I’ll be presenting on Monday. If you’re going to be down there for the event, drop me a line or swing by my session and introduce yourself. I’d love to meet you.