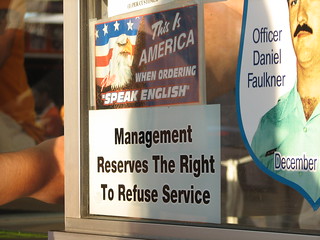 But that’s not always so. A recent case and some helpful nuggets on English-only rules after the jump…

In a recent NJ case, the plaintiff, an African-American, sued her former employer for discrimination, alleging that her Korean co-workers would generally only speak Korean around her. The plaintiff, however, presented no evidence that her Korean co-workers, many of whom spoke English fluently, reverted to Korean to utter racial or ethnic slurs. There was also no evidence that the Korean coworkers spoke Korean as a way to exclude the plaintiff from workplace conversations. Therefore, the court deemed the plaintiff’s discrimination claims to be baseless.

In reaching the foregoing conclusion, the court relied upon this prior NJ decision dismissing a discrimination claim alleging termination for violating a workplace English-only rule because the plaintiff could not show that the rule “was sued as a surrogate for discrimination on the basis of national origin, ancestry, or any other prohibited grounds.”

Even the feds permit English-only rules…sometimes…

The EEOC, in this Compliance Manual confirms that federal discrimination law permits employers to adopt English-only rules under certain circumstances, insofar as it is adopted for nondiscriminatory reasons and not to discriminate on the basis of national origin. Likewise, a policy that prohibits some but not all of the foreign languages spoken in a workplace would be unlawful.

Usually, English-only rules are adopted for safety reasons. Vigyázz, hogy a zongora alá, te szép blogger! does me no good.

As a best practice, the EEOC recommends considering these four factors before adopting an English-only rule:

Trivia Question: Where was the photo in this blog post taken?