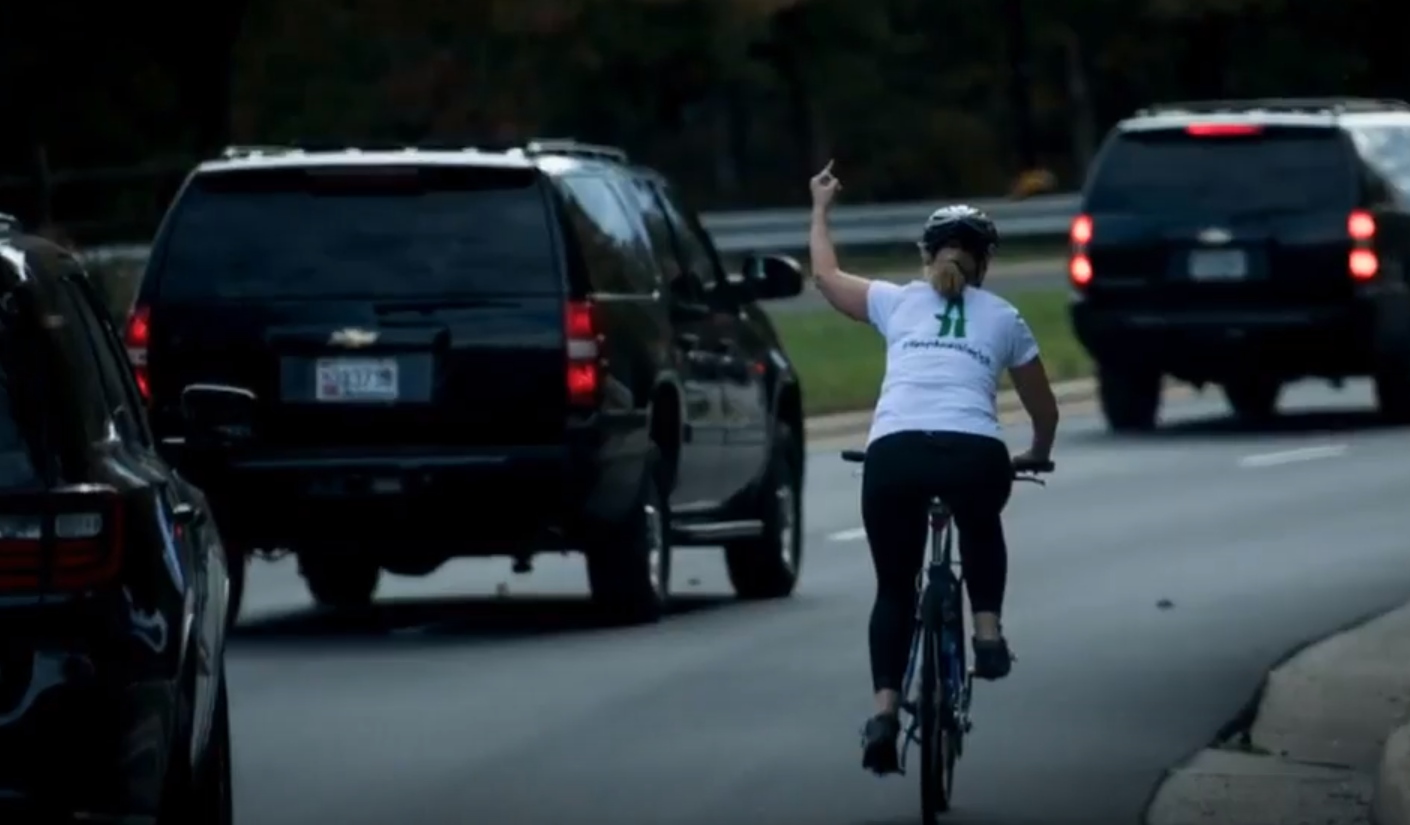 Juli Briskman was out riding her bicycle when she was passed on the road by Donald Trump’s motorcade. So, she showed ’em the middle finger.

And, it was at that precise moment that a White House photographer traveling with the president as he left one of his golf courses happened to catch the one-finger salute on film. Ms. Briskman a viral star on social media.

Who knew that she would lose her job for it so quickly?

From “She-Ro” to Unemployment.

David Smith in Sterling, Virginia, and Kevin Rawlinson of The Guardian were some of first to report on the photograph (here):

The woman on her bike was photographed raising her middle finger when Trump’s vehicles passed her on their way out from the Trump National Golf Club on the banks of the Potomac river, on the outskirts of Washington DC. She repeated the gesture when she caught up with the motorcade.

As noted in the White House pool report, “POTUS’s motorcade departed the Trump National Golf Club at 3.12pm, passing two pedestrians, one of whom gave a thumbs-down sign. Then it overtook a female cyclist, wearing a white top and cycling helmet, who responded by giving the middle finger.

“The motorcade had to slow and the cyclist caught up, still offering the finger, before turning off in a different direction. Motorcade is now gathering speed and heading for DC.”

Jennifer Bendery at The Huffington Post followed that up with a report on Ms. Briskman’s 15 minutes of fame:

Late-night talk show hosts told jokes about the encounter and people on social media began hailing the unidentified woman as a “she-ro,” using the hashtag #Her2020.

By this point, Ms. Briskman’s identity as the biker was still unknown. According to Ms. Bendery’s report, Ms. Briskman eventually told her employer, a government contractor, that she was the one in the photograph. And, that didn’t end well for Ms. Briskman:

Briskman decided to tell Akima’s HR department what was happening when she went to work on Monday. By Tuesday, her bosses called her into a meeting and said she had violated the company’s social media policy by using the photo as her profile picture on Twitter and Facebook.

“They said, ‘We’re separating from you,‘” said Briskman. “Basically, you cannot have ‘lewd’ or ‘obscene’ things in your social media. So they were calling flipping him off ‘obscene.’”

So, I suppose this is where I weigh in.

With no disrespect intended to anyone involved here, I must say that the timing of all of this couldn’t be better. Because, today I’m giving a presentation on, among other things, “politicized workplaces” and “the 24/7 world of social media and the workplace.” And, yesterday, I was able to update my slide deck at the last minute with this godsend of a story to bridge the two topics.

Actually, there’s more to it than that.

If Mr. Met couldn’t come out clean on the other side, what chance did Ms. Brishman have? Sure, Mr. Met’s obscene gesture was captured by a fan at Citi Field, where the Mets play and this one was “off the clock.” But does that matter? Heck no. Just ask Jemele Hill. She’s the ESPN reporter who was suspended for two weeks after tweeting support for a boycott of NFL advertisers.

So, it should come as no surprise that a government contractor wouldn’t want its employees engaged in behavior — on or off the clock — to suggest that their employer may be biting the hand that feeds it.

But, might this come back to bite the employer? Discrimination perhaps…

Ah, there’s a twist to this story. Here’s more from The Huffington Post report:

Virginia is an employment-at-will state, meaning employers can fire people anytime and for any reason. But Briskman said what’s been particularly infuriating is that a male colleague kept his job after recently posting lewd comments on his Facebook page that featured [his employer] as his cover photo. She said this colleague was reprimanded for calling someone [an NSFW indendiary Facebook post], but was allowed to delete the post and keep his job.

Ok, there’s smoke. But, how about fire? “That depends,” said the lawyer.

Most notably, it depends on whether Ms. Briskman is “similarly-situated,” as we lawyers like to say, to her male colleague. Or, for the layperson, is this an apples-to-apples comparison? Certainly, once Ms. Briskman was identified as the cyclist, her post drew a heckuva lot more attention to her employer than did that of her male counterpart. Also, we have no idea if this male employee held the same position as Ms. Briskman. And what his prior disciplinary record at the company may have been compared to hers.

Put simply, there appear to be any number of ways to distinguish what she did from what he did.

But, alas, the company appears to have yet to issue a statement.

Either way, there are three takeaways here for employers: