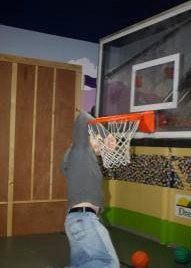 Yep, that’s me honey dipping like Vince Carter. I’m an animal on the court. Especially, when the rim is set at five feet at the local Children’s museum.

So, yes, I’m more of a fan. But, I’m passionate about hoops. Sometimes, I even get carried away. Like that time I carried on on Twitter about how only thing uglier than Kosta Koufos was his game.

I take it back, Kosta. You’re not that ugly.

But, then there’s this report from The Washington Post‘s Jeremy Gottleib about a heinous Twitter attack launched by a Cleveland Cavaliers fan against Golden State Warriors Star, Stephen Curry’s sister and 3-year-old daughter.

Well, the mean tweet caught the attend of Mr. Curry’s sister, who fired back. And then, other Twitter users not only took notice, but alerted the mean tweeter’s employer, Holton-Wise Property Group, in a series of tweets to @HoltonWise.

Apparently, that didn’t end well for the mean tweeter.

If you work in the private sector, talking smack on social media can cost you your job. It’s that simple.

(Unless you’re carrying on about your job; thank you very much National Labor Relations Act).