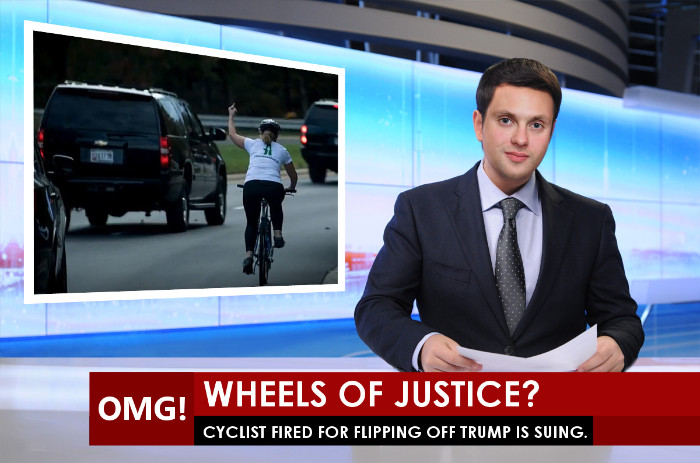 Remember that time one of your employees:

For an employee of a Virginia GOVERNMENT CONTRACTOR (oops!), it resulted in her termination of employment late last year. (More on that here.)

As I say a silent prayer to the blogging gods, read on as I discuss the lawsuit the cyclist just filed against her former employer and offer some practical advice for employers.

May I see the filed complaint, Eric?

Yes, I can. The cyclist has two causes of action against her former employer:

Wait, she got severance, and she’s suing?

Can’t put anything past you, can I? The plaintiff claims that she was forced to resign. But, she seems to want to have her cake and eat it too. I would expect to hit this HARD.

Why didn’t she include a gender-discrimination claim?

The complaint references how the company did not fire a male employee that allegedly engaged in inflammatory political speech on Facebook. Then again, he wasn’t featured on late-night television, and his post didn’t go viral.

But, it’s possible that claim is forthcoming while the plaintiff exhausts her remedies first at the EEOC.

Why did she really sue?

The cyclist wrote about that in an op-ed for The Washington Post. Here’s the money shot:

While acknowledging that the First Amendment protected my right to extend my middle finger, my boss told me that “corporate protection” dictated that he terminate me on the grounds of a social media policy that prohibits “obscene” or “inappropriate” content. Akima does business with the government, and company executives obviously feared that the Trump administration would (unconstitutionally) penalize my employer for my gesture. So, that Tuesday, they forced me out.

The First Amendment bars retaliation against me by Trump. But Trump doesn’t need to punish me for my speech if fear of him spurs my employer to do it. And a private employer can’t suppress my freedom of expression on my own time out of fear of illegal government retaliation without violating Virginia employment law, which is why I filed a lawsuit against my former employer this week.

And here she is talking about on the Post’s YouTube channel.

Eric, aren’t you always trumpeting how employees have no freedom of speech online?

Yes, I am. Here’s last week’s post. Unless the Commonwealth of Virginia has explicit protections for employee political speech — I don’t think it does — I don’t see this ending in victory for the plaintiff.

Which leads us to…