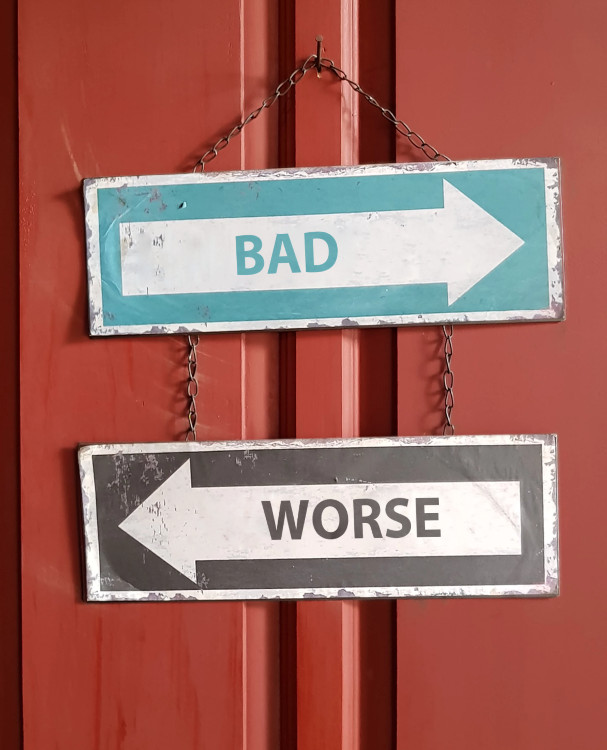 So much for that glass being half-full. For the government’s vaccine mandates, things are going from bad to — ah, you can read this sign.

Today, I’ve got news on the big hit that the Executive Order mandating COVID-19 vaccinations for employees of certain federal contractors (the “Contactor EO”) just took.

That’s right, a Kentucky federal judge blocked the Contractor EO. If you don’t have time to read the entire 29-page opinion (or the rest of this blog post), the first paragraph of the opinion contains the spoilers:

This is not a case about whether vaccines are effective. They are. Nor is this a case about whether the government, at some level, and in some circumstances, can require citizens to obtain vaccines. It can. The question presented here is narrow. Can the president use congressionally delegated authority to manage the federal procurement of goods and services to impose vaccines on the employees of federal contractors and subcontractors? In all likelihood, the answer to that question is no. So, for the reasons that follow, the pending request for a preliminary injunction will be GRANTED.

Now, if you want to get into the weeds a bit, the States of Ohio and Tennessee and the Commonwealth of Kentucky, the plaintiffs, argued that the Contractor EO is unlawful for two reasons. First, the President exceeded his statutory and constitutional authority in promulgating the executive order at issue in this case. Second, the agencies at issue in this case did not follow the proper administrative procedures.

Now, let’s see if I can translate the court’s analysis of the first argument into plain English. Ok, here goes…

There’s a federal law that gives the President power to set the terms of federal contracts. But that power is not absolute.  And using that power to use government contracts to promote a public health measure such as a mandatory vaccination goes too far. What’s next, questioned the court? How about permitting federal agencies to refuse to contract with companies that employ individuals over a certain BMI? No way! Perhaps, the government could have limited the scope of the Contractor EO to workplaces where the spread of COVID-19 is more likely, e.g., crowded indoor facilities. Instead, it cast too broad of a net — a vast and sweeping public health regulation.

As for the plaintiffs’ second argument, the court rejected it. Basically, it noted that the government’s approach was ham-handed but not “arbitrary and capricious,” which, as you know from reading yesterday’s post, translates to “WTH were you thinking?”

Still, since the plaintiffs could demonstrate a likelihood of success on the merits of their first argument and irreparable harm (complying with an invalid regulation almost always results in “non-recoverable compliance”), the court blocked the Contractor EO.

The injunction applies to Kentucky, Tennessee, and Ohio. The rest of you federal contractors still must comply.