Yesterday, the National Labor Relations Board announced in this press release that it had issued a second social-media report to help provide further guidance to practitioners and human resource professionals.

What does that report say? And how can you bulletproof your social-media policy?

The social-media memo, a copy of which you can obtain here, covers 14 cases, half of which involve questions about employer social-media policies. Those seven cases that address the scope of social-media policies underscore that they should not be so broad as to chill employee’s rights to engage in protected concerted activity such as the discussion of wages or working conditions.

What does the National Labor Relations Board say you can’t do?

Most of the social-media policies that the NLRB addressed were found to be overly broad. For example, in one case, the NLRB found that an employer rule forbidding employees from “[m]aking disparaging comments about the company through any media, including online blogs, other electronic media or through the media” was deemed unlawful because “it would reasonably be construed to restrict Section 7 activity (more on Section 7 here), such as statements that the employer is, for example, not treating employees fairly or paying them sufficiently.”

In another case, the NLRB deemed unlawful a social-media policy that provided that “employees should generally avoid identifying themselves as the Employer’s employees unless discussing terms and conditions of employment in an appropriate manner.” That too would infringe upon Section 7 rights to discuss terms and conditions of employment — even if those discussions were “inappropriate.” Here, the NLRB further determined that an employer disclaimer in the social-media policy that nothing in the policy should be construed to prohibit employee rights under the National Labor Relations Act was not enough to make the overall policy lawful:

We also found that the “savings clause” in the Employer’s social media policy was insufficient to cure the ambiguities in the rule and remove the chill upon Section 7. The savings clause provided that the policy would not be interpreted or applied so as to interfere with employee rights to self-organize, form, join, or assist labor organizations, to bargain collectively through representatives of their choosing, or to engage in other concerted activities for the purpose of collective bargaining or other mutual aid or protection, or to refrain from engaging in such activities. We explained that an employee could not reasonably be expected to know that this language encompasses discussions the Employer deems “inappropriate.”

So, what can you do?

Fortunately, the NLRB offered some guidance in this area. One subject policy referenced in the report was found to be lawful; another became lawful after it was revised. Let’s address the second one first. 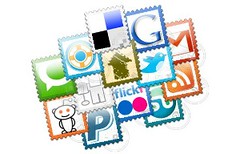 In that case, the Employer’s original social-media policy prohibited “discriminatory, defamatory, or harassing web entries about specific employees, work environment, or work-related issues on social media sites.” Subsequently, the Employer replaced that policy with one that prohibited the use of social media to “post or display comments about coworkers or supervisors or the Employer that are vulgar, obscene, threatening, intimidating, harassing, or a violation of the Employer’s workplace policies against discrimination, harassment, or hostility on account of age, race, religion, sex, ethnicity, nationality, disability, or other protected class, status, or characteristic.”

Shockingly, the NLRB deemed the original policy overly broad because employees had the right to engage in protected concerted activity to criticize employer policies and treatment of employees — even if that speech is “defamatory.” The NLRB, however, found that the amended policy was lawful because “a rule’s context provides the key to the ‘reasonableness’ of a particular construction. In this regard, the Board has found that a rule forbidding ‘statements which are slanderous or detrimental to the company’ that appeared on a list of prohibited conduct including ‘sexual or racial harassment; and ‘sabotage’ would not be reasonably understood to restrict Section 7 activity.”

In another case involving a national drugstore chain, the Board concluded that the following provision in a social-media policy was not overly broad and, therefore, lawful.

The Employer’s social media policy provided that the Employer could request employees to confine their social networking to matters unrelated to the company if necessary to ensure compliance with securities regulations and other laws. It prohibited employees from using or disclosing confidential and/or proprietary information, including personal health information about customers or patients, and it also prohibited employees from discussing in any form of social media “embargoed information,” such as launch and release dates and pending reorganizations.

So, here are three tips based on the NLRB memo: