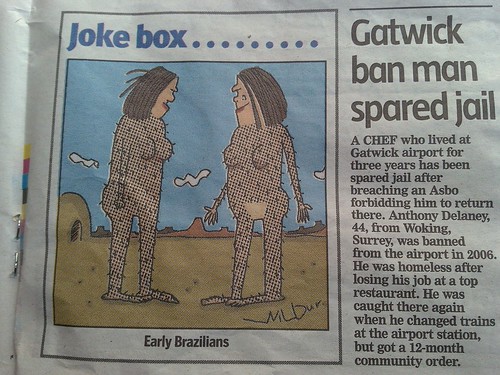 You know, maybe I should have gone with the porta-potty-harassment post that I originally had planned for today. Nah. My analytics tell me that my best-received posts have a common theme: crotch and Brazil. Besides, everyone knows that nothing says Friday like a porta-potty post. Just wait ’til Friday.

So today, after the jump, let’s wax poetic, shall we?

Dave Jamieson from the Huffington Post reports here about a woman hired at a spa as a “Wax Specialist” who, in this Complaint, alleges that her recent termination was discriminatory.

But, you see, friends, it seems that this “Wax Specialist” was required to give and receive a Brazilian wax — in front of her female colleagues — as part of training. She further claims that, when she refused and complained to the spa owner, she was fired.

This is a first for me. Oh, you too? No kidding…

Notwithstanding alleged assurances from the corporate trainer that she should “put in a fresh tampon and take an ibuprofen and you’ll be fine,” (oh, if I had a nickel…) the plaintiff claims that her termination for refusing the big rip-off amounts to sex discrimination in violation of Title VII and the Pennsylvania Human Relations Act.

Come on, please ask me why.

Oh, why, you say? Because allegedly the employer did not require that male employees get Brazilian waxes too.

Further, the plaintiff claims that the Brazilian wax requirement amounts to sexual harassment. And that her termination, after she complained, was also retaliatory.

Here’s my prediction: The defendants have the plaintiff by her remaining short hairs The discrimination claims all get dismissed.

I can’t wait for your comments below!