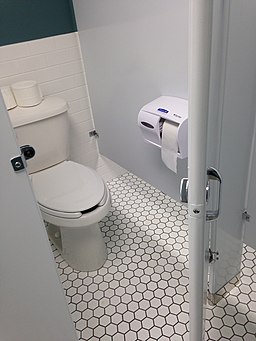 If I were the boss, I’d fire anyone for talking in a public office restroom. Period. Full stop.

But, carrying on and cursing about clients of the company is certainly a terminable offense.

Two employees entered a company restroom that is open to the public and customers. While they were both in the restroom, the first employee complained to the second employee that a client that he had assisted 4 years ago had “been dropped into his pipeline . . . and had been trying to get in touch with a Client Specialist for over a week, and that client should get in touch with a f**king Client Care Specialist and quit wasting [his] fucking time.”

The second employee responded that he understood why the first employee was frustrated.

Unbeknownst to the two employees, a supervisor was doing his business in the bathroom stall, overheard the conversation, and yadda, yadda, yadda, the first employee gets fired for cursing and discussing clients in the public restroom.

So, what did the first employee do about it? Well, he went to the National Labor Relations Board, of course, claiming that he was engaged in protected concerted activity; i.e., when employees act together to try to improve their pay and working conditions, with or without a union.

There’s nothing protected about cursing about clients in a public restroom.

Now the Obama NLRB may have bought that argument. Actually, an administrative law judge did conclude that the two employees were engaged in protected concerted activity. But, on appeal, the bipartisan three-member NLRB panel reversed and concluded that the company was within its rights to terminate the first employee’s employment. So, I take that back, even under the prior Board, the employer may have won too.

Shout out to Jon Hyman at the Ohio Employer Law Blog for his stellar write-up of this NLRB decision yesterday. I’ll leave you with his takeaway, which focuses on deterring public conversations about clients and other confidential information:

I want to focus on another issue—the supervisor’s (albeit coarse and unprofessional) admonition against discussing clients in the bathroom.

Despite the fact that we use bathrooms to engage in the most private of personal activities, public restrooms are not fit for private conversations. One never knows who is lurking in a stall, or who will open the outer door and enter at the wrong time. [Editor’s note: Any bathroom conversations are disgusting.]

My suggestion to employers is to include within your confidentiality policy a reminder to employees not to use the restroom for private conversations. One should assume that everything said in a public bathroom is not private. If you need to discuss something in confidence, use an office or other room in which you can control access. These employees showed poor professional judgment, and suffered the consequences.