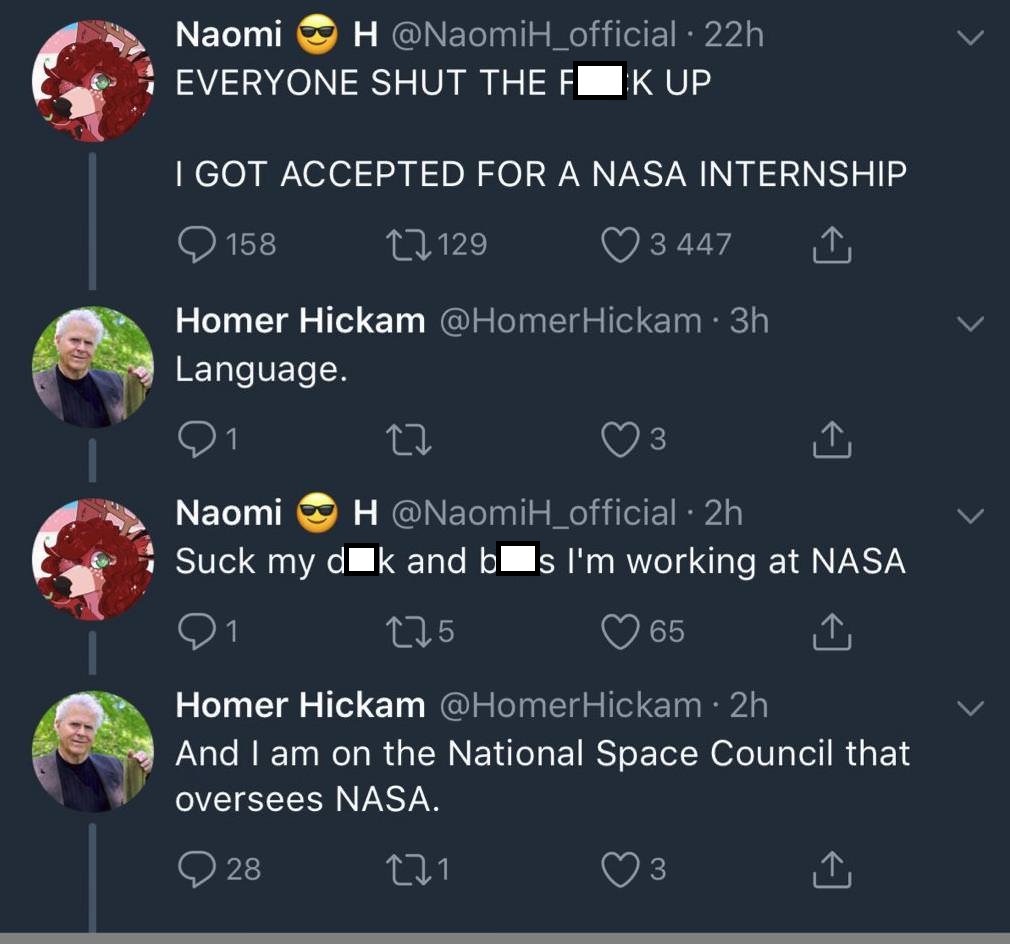 Here’s a pro tip for you:

The next time you land an awesome internship, avoid exchanging tweets similar to the redacted ones in the screenshot up there. Especially with someone who is on the council that oversees the company with which you just received the internship. This pro tip applies even if you don’t know that the person is on the council when you tweet. It’s a bad look and doesn’t bode well for your long-term internship prospects.

Because that’s precisely what happened, according to several published reports. Here’s one example. Here is an edited version of @NaomiH_official’s recent Twitter exchange with Homer Hickam. Here is the NSFW unedited version.

Who is Homer Hickam? Wikipedia lists Mr. Hickam as an American author, Vietnam veteran, and a former NASA engineer who trained the first Japanese astronauts. His 1998 memoir Rocket Boys was a New York Times Best Seller and was the basis for the 1999 film October Sky. Presumably, @NaomiH_official didn’t know this before putting him on full blast.

But, here’s where things get interesting.

Mr. Hickam blogged about the incident. He since deleted the post (and his Twitter account because of all the online abuse he has taken). But, Buzzfeed as a copy of the blog post. In it, Mr. Hickam underscores that he played no role in @NaomiH_official  losing the NASA internship. Instead, according to Mr. Hickam, NASA learned about the incident from hashtags that Twitter users used to berate Mr. Hickam.

So, what’s next for @NaomiH_official?

Presumably, the 15 minutes of infamy will fade. Just like they did for @theconnor and @quinnorton, among others. According to @NaomiH_official’s Twitter profile, tweets are now protected, and @NaomiH_official is “Taking a break from twitter for a while.” That may be the smartest thing that @NaomiH_official has done recently.

Next to landing the NASA internship.

Put yourself with Mr. Hickam’s shoes, except you do have the power to hire and fire. What would you do after being on the receiving end of that Twitter exchange? Would it make a difference to you if the person apologized?