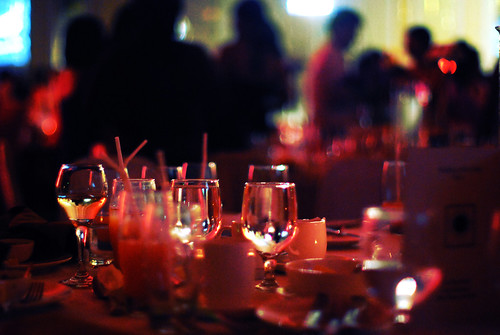 While I must admit that I laughed more than I cringed, my readers came through with some tales of holiday parties gone haywire.

Here are some snippets:

“A young lady just out of college had only been with the company a few months when she became completely inebriated at the party and proceeded to do the following on the dance floor; very publicly and loudly break up with her fiancé and air all of their dirty laundry about his failings in the bedroom, grind up and down on our CEO as he danced with his wife, and slowly began to strip off her clothes. Thankfully someone had gotten ahold of her mother from her emergency contact list on her phone and her mother picked her up before she took off anything more than her shirt and skirt.”

“One year at the holiday party, one of our managers (1) had too much to drink; (2) started flirting with one of her male direct reports; (3) and then forced a hot-and-heavy deep kiss on the employee; (4) who was gay.”

“It all happened before I joined the company,  but the annual company Christmas party was held at a local hotel.  No spouses were invited.   One of the “games” was musical laps.   The men sat in a circle facing outward and the women walked around in a circle,  jumping into the awaiting laps when the music stopped.   I’m not sure what the prizes were,  but there were rooms available at the hotel.”

“I was asked to provide everyone with two drink tickets. The owner was incredibly upset for HR killing everyone’s fun, and immediately started buying everyone rounds of drinks and shots. Since our party was on a Thursday night, and in an effort [not] to be a witness to the disaster that was developing, I left around 8pm. The next day, I was informed that the owner disagreed with a recent decision that had been made to promote someone to a supervisor. His preferred candidate was a poor performer with attendance concerns, but he had been there a long time and the owner liked the notion of rewarding his loyalty. The department manager was a wrestler in high school. Naturally, the owner challenged the hiring manager to a drunken wrestling match over whether or not this employee would be promoted…in front of everyone, including the employee in question. When the owner lost the match, and the employee also lost his promotion, he also dignity and respect.”

Folks, don’t do any of this stuff. But, do have a great weekend!