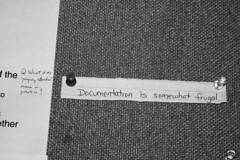 Last week, a federal appellate court (here) allowed a white assistant manager to pursue claims of reverse race discrimination against a bank because the reasons that the bank offered to the court for firing the plaintiff did not jibe with the documentation in its own file. Oh, wait a minute, there was zero documentation in the file.

I smell some trouble for the employer and some good lessons for my business readers, after the jump, of course…

How does one prove reverse-race discrimination?

An employment decision is unlawful if a white employee can demonstrate that her race was “a motivating factor” for her firing, even if the employer was also motivated by other lawful factors. Generally, this involves three steps:

One way that employers can really screw things up is by failing to timely document employee issue or just not document altogether.

In the case involving the white assistant manager, the defendant-bank claimed that it discharged the plaintiff on February 20, 2009, because of three incidents in which the plaintiff discussed race in the workplace. The bank’s position was that it did not tolerate employee discussions about race, include those that do not create a hostile work environment.

How about some best practices for employers?