Did a bunch of bloggers sue you last week for wage and hour violations?

Has the National Labor Relations Board (NLRB) threatened to file a complaint against you for Twitter shenanigans?

Well, that was Thomson Reuters’ week. And, as you can imagine, it sucked.

The NLRB continues to target businesses that discipline employees who trash management. 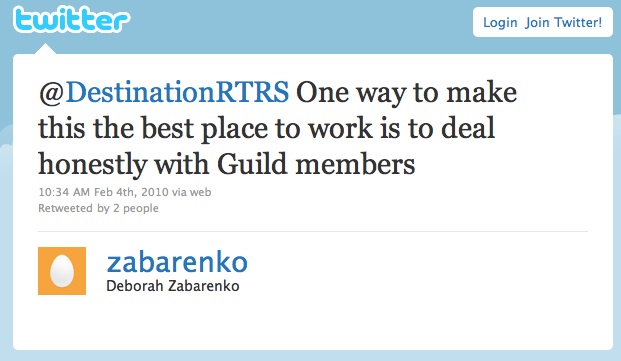 According to the New York Times report, the NLRB has not yet taken any official action, but has confirmed to Thomson Reuters that it plans to do so:

“A National Labor Relations Board official confirmed…that the board’s Manhattan office had informed Thomson Reuters and the union [the Newspaper Guild] of the planned complaint. The official, who insisted on anonymity because the complaint had not yet been filed, confirmed that it involved an accusation that the company had violated a worker’s federally protected right to engage in concerted, protected activity with co-workers to improve working conditions.

Typically, the agency warns parties before a formal complaint is filed to encourage settlement of the dispute. If no settlement occurs, an administrative law judge will hear the complaint.

A Thomson Reuters spokeswoman said the company was surprised by the board’s complaint because it did not believe Ms. Zabarenko had even been disciplined. She said the company’s social media guidelines were straightforward and like those at many other companies.”

Last November, an NLRB regional office filed a complaint against a CT employer which had terminated an employee for criticizing her boss on Facebook. That matter settled and, as part of the settlement, the employer agreed to revise its social media policy to allow employees to discuss online certain matters relating to their jobs (e.g., wages, hours, working conditions).

In the CT case, many co-workers of the terminated employee posted comments under the original inflammatory post. Accordingly, the NLRB took the position that the employees were engaging in protected concerted activity.

This case could be some hot ish. I will be following it closely and providing updates on this site.

But tomorrow, in https://www.theemployerhandbook.com, it’s a showdown between Thomson Reuters and 50 angry bloggers…