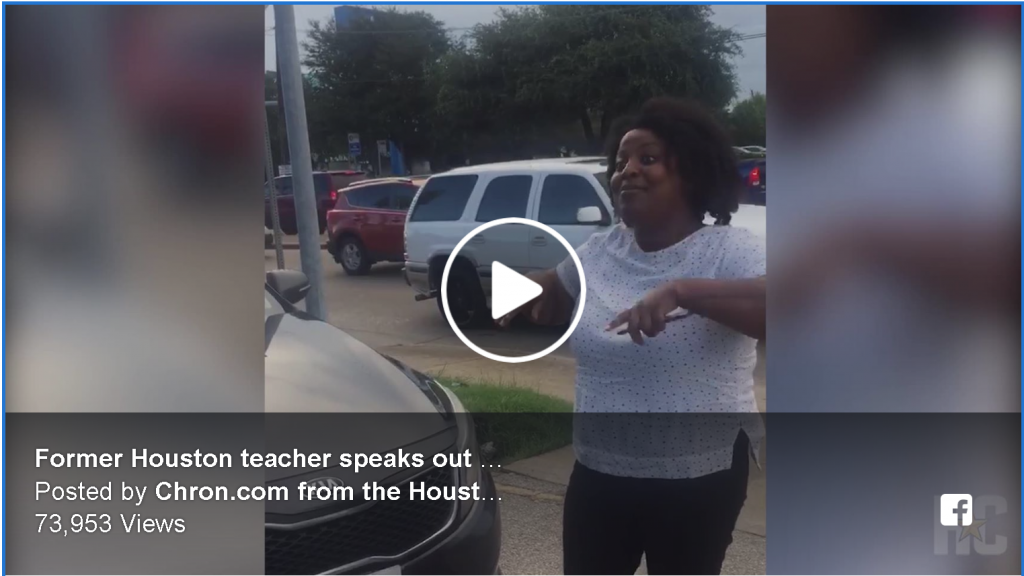 If not, then out of concern for you, I suggest that you see a doctor. Because after all, we’re talking about a post from just one day ago.

Either way, to get you back up to speed, yesterday I blogged about an employer that was required to pay $100K to a worker it fired for making racist Facebook posts. That was because an arbitrator concluded that the employer knew about the employee’s racist behavior online but did nothing about it for several months until the media reported it.

A former teacher … lost her job this week when two short videos surfaced on Facebook showing her making racially insensitive remarks toward a Hispanic couple.

[The former teacher] was involved in a fender bender with the couple  Tuesday afternoon just before the verbal exchange. Houston police eventually arrested her on an assault charge.

Stephanie Haney at the Daily Mail (here) reports that the former teacher asked the Hispanic couple “if they ‘swam here with the rest of your family’ and called their US citizenship status into question. She also insulted her Hispanic students … during the tirade, telling the couple, ‘I teach all y’all dumb-a** kids’.”

(If you click on the image at the top of this post, you can view the exchange.)

Now unlike the employer in yesterday’s post, the former teacher’s employer didn’t sit on the information once it became aware of the altercation. Instead, it acted swiftly.

Here is the statement from the school:

[W]e have zero tolerance for discrimination. On Wednesday morning, we were notified of comments made by [an] employee that did not align with our values. We immediately made the decision to terminate the employee. She no longer works for [us]. We appreciate our many social media supporters who notified us of this incident. We value each and every student and family that is a part of the [school community], and we do not tolerate discriminatory remarks of any kind. [We are] committed to taking swift action in situations such as these, and we remain committed to our mission of preparing our students for choice-filled lives as they continue on the path to and through college.

Like I said yesterday, “if you know about an employee’s online racism and tolerate that sort of behavior, then you’re not considering the bigger picture. The bigger picture is that you are sending the clear message to the rest of the workforce that you condone racism…Fostering a workplace culture that does not tolerate discrimination means creating accountability and applying zero tolerance for that behavior both in and out of the office, both on and off the clock.”

This employer gets it.