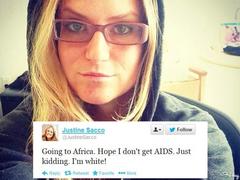 It doesn’t end well for the PR Exec. Just so we’re clear.

A PR Executive from IAC, which owns such online publications as The Daily Beast, Match.com, About.com, and several others, lost her job over the weekend for tweeting: “Going to Africa. Hope I don’t get AIDS. Just kidding. I’m white!”

The PR Executive, Justine Sacco, tweeted the offensive message just before boarding her flight to South Africa. Apparently, she didn’t fly on a plane with in-flight wifi.

Had she been connected to the internet during her 12-hour flight from London to Cape Town, Ms. Sacco may have streamed Lethal Weapon 2 clips seen her insensitive message retweeted over 3,000 times and picked up by several media outlets around the world, according to UK’s Daily Mail. She also missed the hashtag #HasJustineLandedYet, which trended on Twitter during her flight.

In a statement released Saturday, IAC said: “The offensive comment does not reflect the views and values of IAC. We take this issue very seriously, and we have parted ways with the employee in question.”

How would you respond?

Unfortunately, there’s no bulletproof social media policy or training that will prevent all employees from acting stupid online. Still, IAC publicly acknowledged that Sacco should not be forever stained because of a momentary lapse in judgment:

“We hope, however, that time and action, and the forgiving human spirit, will not result in the wholesale condemnation of an individual who we have otherwise known to be a decent person at core.”

Still, few could argue with IAC’s decision to fire Sacco.

How would handle a similar situation involving an irresponsible employee tweet going viral from her personal account? Let me know in the comments below.