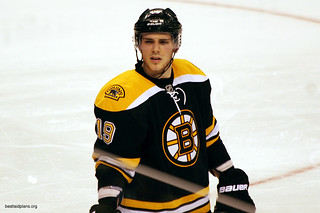 As many of you know, I am a HUGE Boston Bruins fan. But, right now, I have little love for former Bruins winger Tyler Seguin.

You see, Seguin was a highly touted 2011 draft pick who did a disappearing act in the playoffs this year. Amidst reports that his off-ice behavior was interfering with his on-ice performance, the Bruins traded the 21-year-old Seguin to the Dallas Stars on July 4.

The media scrutiny caused Seguin’s mom to come to his defense. (I’m sure that won’t ignite the crowds at all during road games). But just as that story began to lose steam, Seguin’s Twitter account published this tweet:

I say it was Seguin’s Twitter account that spewed this garbage, rather than Seguin himself because, like other young athletes before him, Seguin claims his account was hacked. And, according to Sam Laird at Mashable.com, Seguin has since deleted his Twitter account. He also notes that this is not the first time that Seguin’s Twitter activity has drawn scrutiny for homophobic slurs.

All of this brings me back to yesterday’s post about social media red flags that cause employers not to hire certain candidates. I feel sorry for the Dallas Stars. They are now saddled with an athlete who, I’m guessing, they would have passed on last week had this hateful tweet surfaced earlier.