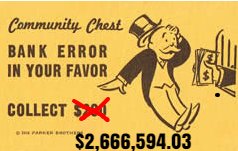 Back in the day, landing on “Community Chest” in Monopoly was second only to building hotels on Boardwalk.

But, even with inflation, neither approaches the feeling of discovering that your employer goofed by agreeing to provide you with $2,747,400 in severance pay, rather than the previously agreed-upon $80,805.97.

And the employee almost got away with it except for some meddling Michigan judges.

Alright employers, grab your pearls and clutch away as you read the facts from El-Hayek v. Trico Product Corp. (opinion here)

Plaintiff was employed by defendant for about 28 years when he and 12 other employees were permanently laid-off in October 2014 after defendant was purchased by another company. Plaintiff was told at a meeting that if he signed an agreement containing noncompetition, release, and other clauses, he would receive separation pay for 34 weeks, along with other benefits. Plaintiff received an agreement in the mail soon after the meeting, which had already been executed by defendant. After several weeks, he signed the agreement and returned it to defendant.

The dispute in this matter centers on plaintiff’s entitlement to separation pay. Prior to his termination, plaintiff earned about $123,585 annually. The separation agreement executed by the parties stated that plaintiff was to receive $80,805.97 a week for 34 weeks, for a total of about $2,747,400. However, if one takes plaintiff’s salary on a weekly basis and multiplies it by 34, the result is $80,805.97. According to … defendant’s [HR Person], this is no coincidence. [The HR Person] … mistakenly entered the total amount plaintiff was to receive over 34 weeks, rather than the weekly amount he was to receive. The separation agreements for the other laid-off employees had set forth only the gross amount they would receive, not the weekly amount.

(I didn’t have it in me to identify the “HR Person” who made the mistake.)

And, fortunately, the court didn’t have the stomach to enforce the agreement against the company either. Indeed, the company presented the court with “clear and convincing, uncontroverted evidence that the separation agreement contained a mistake, made by defendant when it drafted the document.” Further, the former employee presented no evidence to support his subjective belief to the contrary. Indeed, the court concluded that the plaintiff had engaged in “inequitable conduct.”

In other words, “Gotcha” doesn’t play well in the Oakland Circuit Court in Michigan.