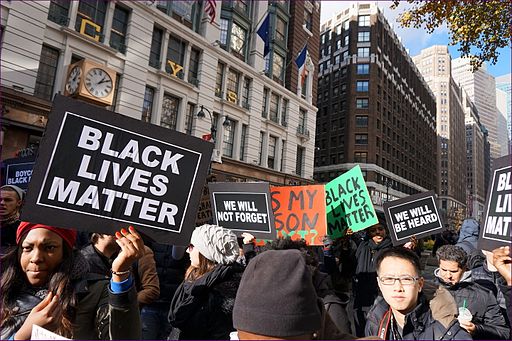 A white man who cast himself as a rising star at a midwest bank claimed that his trajectory plummetted after he posted a message on Facebook criticizing the Black Lives Matter movement.

From rising star to unemployed.

According to plaintiff, other “African-American employees of Finance of America frequently posted messages and photos related to Black Lives Matter, including posts suggesting that African Americans who have committed crimes are treated more harshly than their Caucasian counterparts and that police offers intentionally target African Americans in police shootings.”

He further claimed that “[t]hese employees ‘were permitted to continue their employment without retribution.'”

Plus, according to the plaintiff, his supervisor told him that his employer was not disciplining him because of his political beliefs. Instead, the employer was concerned about upsetting African-American employees whom the post offended.

Ultimately, the plaintiff claims that he was suspended and demoted. Then, lickety-split, they fired him too.

So, among other things, the plaintiff alleged race discrimination.

Fair? Unfair? Or even discriminatory?

On the one hand, we have a white employee who isn’t exactly making an apples-to-apples comparison between himself and other co-workers. That is, was there an African-American employee who did precisely what he did and did not get disciplined for it.

Then again, that’s a stretch, right? And the plaintiff argued that, given his strong performance at the company, an out-of-the-blue firing seemed “fishy.”

Faced with a motion for judgment on the pleadings, the court (here) gave the plaintiff the benefit of the doubt for now:

Mr. Kane sufficiently alleges background circumstances showing the plausibility of reverse discrimination. Specifically, he has provided enough background information, including his stellar job performance and his purported complaints about discriminatory conduct, to plausibly suggest that there was something “fishy” about his termination. Second, he has alleged that he was meeting Finance of America’s legitimate performance expectations and, in fact, was excelling. Third, he alleges that he suffered an adverse employment action when he was terminated. Finally, he alleges that he was treated less favorably than some African American employees because he alleges that several African American employees posted messages and photos related to Black Lives Matter and were not disciplined.

Drawing all reasonable inferences from the Amended Complaint in Mr. Kane’s favor, the Court finds that Mr. Kane has pled sufficient facts to support his race discrimination claim….

Now, remember that, in ruling on a motion for judgment on the pleadings, the court accepts everything in the pleadings as true. There has been no discovery, and the case could look a lot different in several months, unless the case resolves sooner.

The lesson for employers.

I’ve dealt with situations in which the white employee went much further and used racial slurs in Facebook posts. That’s an easier call.

Regardless of whether you share the same beliefs as the plaintiff, I’ve encountered many people who do, is that enough to get fired? Well, it’s enough to spur a conversation at work about respect in the workplace and accepting that co-workers are going to have some opinions — some articulated online — that won’t resonate well with others.

It’s also a good time to remind people about the slippery slope between disagreement and discrimination, whether implicit or overt.