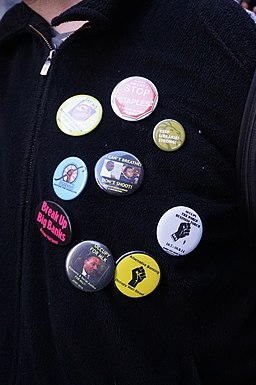 If you’ve read the news recently, you may have seen stories like this one and this one about large businesses that had policies against employees wearing pro-BLM clothes and apparel. In those two examples, each of the companies has since changed its policies. You can read more about that here and here.

But, let’s say that your business still wanted to ban employees from wearing Black Lives Matter masks or symbols at work.

I’m not suggesting that either your company would want to do this or that I’d favor such a rule. That’s not the point of this post. Instead, since this is an employment law blog, I’m merely asking if it would be legal to have that rule.

TL;DR probably not, unless there are exceptional circumstances.

I’ll explain by taking you back to 1945. Elvis was King, and Amelia Earhart became the first woman to fly solo across the Atlantic.

I may be off by a bit on both.

But, I do know that in 1945, the Supreme Court decided a case called Republic Aviation v. NLRB. In Republic Aviation, SCOTUS held that Section 7 of the National Labor Relations Act protected the right of employees to wear union buttons and other insignia at work. Section 7 guarantees employees “the right to self-organization, to form, join, or assist labor organizations, to bargain collectively through representatives of their own choosing, and to engage in other concerted activities for the purpose of collective bargaining or other mutual aid or protection,” as well as the right “to refrain from any or all such activities.”

Put another way; employees can get together to talk about working conditions, like the raise they deserve, the bad coffee in the breakroom, and how their boss is a d**k.

However, last year, the National Labor Relations Board confirmed (here) that the right to express yourself with pieces of flair is not absolute. For example, an employer may be special circumstances that justify neutral work rules that prohibit the wearing of all union buttons and insignia. The “special circumstances” test weighs employees’ Section 7 rights against the employer’s legitimate business interests. But those employer interests need to be pretty darn special.

Except, sometimes, there’s a bit of a compromise. Like in that Board case decided last year, the employer had a rule that limited the size and appearance of buttons and insignia that employees can wear but did not prohibit them outright. And the Board was ok with that.

However, in another recent case from the Fifth Circuit, the federal appellate applied the “special circumstances” narrowly to situations such as where permitting employees to display protected items would: (1) jeopardize employee safety; (2) damage machinery or products; (3) exacerbate employee dissension; or (4) unreasonably interfere with a public image that the employer has established, as part of its business plan, through appearance rules for its employees. Ultimately, the Fifth Circuit concluded that an employer did not present special circumstances to justify its ban on employees wearing a “Fight for $15” button during work. It also didn’t help that the employer required its employees to wear company-issued buttons twice a year.

Now, some of you may be thinking that Black Lives Matter is a national social issue that isn’t specific to the workplace. So maybe it doesn’t invoke Section 7 of the National Labor Relations Act. That’s possible. Then again, it wouldn’t be hard for an employee to argue that the BLM message could apply at work by opposing discrimination and fostering inclusion.

So, could your business legally stop employees from wearing Black Lives Matter masks or insignia at work?

In most cases, probably not.