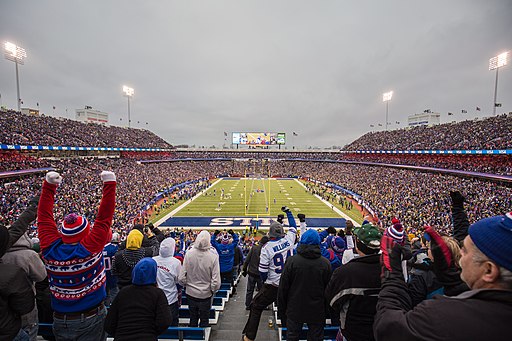 At halftime of my seven-year-old’s soccer game, I was perusing my slow weekend RSS feed. Of the seven Feedly items, one stood out: a “news” from Deadspin (NSFW) about a fan who hit the five yard line with a phallus toss (video is NSFW) during the third quarter of the National Football League between the Buffalo Bills and the New England Patriots. Here’s another angle. (Still NSFW).

And, it got me thinking…

This could make for a good HR compliance lesson. Trust me.

What is a hostile work environment?

Rather, a real hostile work environment requires that a victim establish four elements:

Plus, where the harasser is a non-supervisor, the victim must also demonstrate that the employer knew or should have known of the harassment and failed to take prompt remedial action.

Can a visitor create a hostile work environment?

The harasser can be the victim’s supervisor, a supervisor in another area, a co-worker, or someone who is not an employee of the employer, such as a client or customer.

Don’t believe me? Check out this EEOC page on sexual harassment.

What if the fake-penis tosser was a guy?

So a fan throwing a fake penis on the field must be creating a hostile work environment for the football players, right?

Let’s go through the test:

Now, let’s assume that a player could establish the four elements above. Because the culprit was a fan, that victim still must also demonstrate that the employer knew or should have known of the harassment and failed to take prompt remedial action.

Certainly, the Bills knew or should have know about the toss. It was in plain sight, televised, reported, etc.

In terms of remedial measures, since this person is taking credit on Twitter for the toss, presumably the Buffalo Bills organization can revoke his season ticket privileges. Or, if he’s not a season ticket holder, ban him from the games. Otherwise, the Bills could also implement heightened screening procedures and warn fans that throwing fake penises at the field won’t be tolerated henceforth.

Something like that. Or just treat this as a one-off and why am I still typing.

I’m pretty sure that’s how it works.