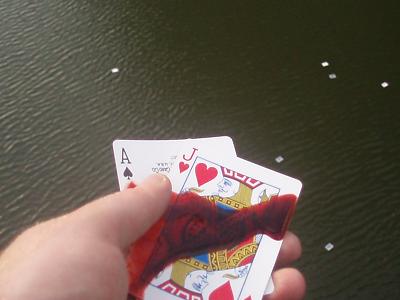 [Editor’s Note: Because “Playing the Race Card” was already taken]

The title of this post is comprised of the seven poorly-chosen words from a Vice President of Operations at a Detroit casino right before the casino terminated a white employee for allegedly botching supervision of a dealer card shuffle.

What do you think? Do we have a live race-discrimination claim? Oh yeah, we do! Details after the jump, as well as thoughts on employers who strive to maintain racial balance in the workplace…

Too obvious? I don’t care. The song rocks!

[Editor’s note: Little known fact about yours truly. I have been to Las Vegas about 40 times and am presently barred from two casinos for card counting. No, I have never been to the “back room.” No, I am not in the Griffin book (I think). But, I do know that it is time to double-down when I see a federal court opinion addressing discrimination and the minutia of blackjack shuffles.]

Kimberly Ondricko, a white female, worked her way up through the ranks of the MGM Grand Detroit over several years from Casino Dealer-Trainee to Floor Supervisor. As a Floor Supervisor, her job, among other things, was to make sure the dealers that she supervised do shuffle and deal properly.(Otherwise, you get sharks like me who may be inclined to take advantage).

On April 27, 2008, one of Ondricko’s dealers screwed up a shuffle. Before Ondricko realized, cards were in play and 90 seconds had passed. For her mistake, Ondricko was fired. She later sued for race and gender discrimination.

This statement was made by an MGM decisionmaker shortly before notifying Ondricko of her termination, immediately after discussing inquiries by a fired black female employee’s attorney, and in the same meeting where MGM’s decision not to fire a black male for similar conduct is discussed. Under these circumstances, and in light of the fact that Boyd [the blank female employee] had a much worse disciplinary record than Ondricko, it is certainly reasonable to conclude from O’Connor’s statement that MGM was motivated by a desire to be racially balanced in its terminations for misconduct related to shuffling.

I can imagine that some private employers may be concerned about maintaining a racial balance in the workplace. Forget it! Maintaining racial balance is discrimination. You run a business. Make employment decisions based on qualifications and performance. But you already knew that, right?