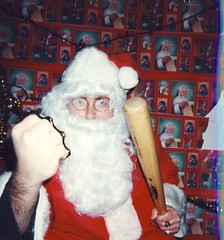 With the National Hockey League season in jeopardy, I imagine that Canadians are a fairly ornery bunch these days.

Even further north, hockey fans too are in turmoil. Reports from the North Pole have Mrs. Claus moping around. Morale amongst Santa’s helpers is at an all-time low, causing toy production to drop 20%. And the elf of the shelf just flipped me the bird.

But it appears that no one is taking it harder than jolly old Saint Nick.

According to this report from Shawn Jeffords at the Toronto Sun, last week, NHL Commissioner Gary Bettman dressed up as a mall Santa at a Toronto Christmas Market told a three-year-old waiting in line to sit on his lap that the Toronto Maple Leafs “suck.”

The boy’s mother than took to Facebook and put Kris Kringle on full blast:

Then he said, ‘Oh, you’re wearing a Toronto Maple Leafs tuque, you shouldn’t be wearing that, they suck.’ At that point, I took my son and told him we should go, Santa isn’t being very good today.

The event organizers apologized, via Facebook, and then promptly terminated Santa’s employment.

But, folks, let me tell you. Santa is resilient. He dusted off his resumé, checked the online job boards, and quickly found new employment at a mall in Portland, Maine.

That is until, as The Daily Dot (via Mashable.com) reports here, a mom complained on the mall’s Facebook page after Santa allegedly refused to let her six-year-old daughter sit on his lap because she didn’t purchase a picture package. Here’s a video of mom and daughter sharing this scrooge story. Now, Santa is once again out of a job.

And, rumor has it, he may be filing a national-origin-discrimination Charge with the EEOC.