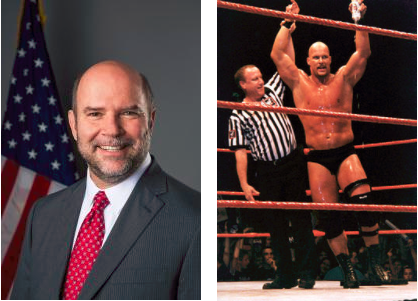 How else can you explain what happened last week at the National Labor Relations Board?

According to the website, the Board is “an independent federal agency vested with the power to safeguard employees’ rights to organize and to determine whether to have unions as their bargaining representative. The agency also acts to prevent and remedy unfair labor practices committed by private sector employers and unions.”

When the President of the United States of American is a Democrat, the Board seems much more committed to unions. And, when a Republican sits in the Oval Office, you get what we had last week. That is, the Board, behind outgoing Board Chair Philip Miscimarra, made like “Stone Cold” Steve Austin and stomped a mud hole in the past several years of employee-friendly jurisprudence.

And then, it walked it dry.

On Tuesday, I wrote about how the Board foreshadowed that it was going to dump its quickie-union-election rules. It was kinda like that time Stone Cold returned to help the WWE defeat the WCW/ECW alliance.

As I wrote on Thursday, the Board laid waste to all sorts of once unlawful employee handbook rules and procedures.

Also on Thursday, the Board announced that it had blown up its joint-employer-liability rules:

In all future and pending cases, two or more entities will be deemed joint employers under the National Labor Relations Act (NLRA) if there is proof that one entity has exercised control over essential employment terms of another entity’s employees (rather than merely having reserved the right to exercise control) and has done so directly and immediately(rather than indirectly) in a manner that is not limited and routine.  Accordingly, under the pre–Browning Ferris standard restored today, proof of indirect control, contractually-reserved control that has never been exercised, or control that is limited and routine will not be sufficient to establish a joint-employer relationship.

Then, on Friday, the Board announced that it re-wrote the book on the duty that an employer has to bargain with a union:

Consistent with other Board cases dating back to 1964, the Board held that actions do not constitute a change if they are similar in kind and degree with an established past practice consisting of comparable unilateral actions.  The Board also held this principle applies regardless of whether (i) a collective bargaining agreement (CBA) was in effect when the past practice was created, and (ii) no CBA existed when the disputed actions were taken.  Finally, the Board ruled such actions consistent with an established practice do not constitute a change requiring bargaining merely because they may involve some degree of discretion.

Also on Friday, which was Chair Miscimarra’s last day of work, the Board announced that it would restore prior precedent governing how the Board determines an appropriate collective-bargaining unit.