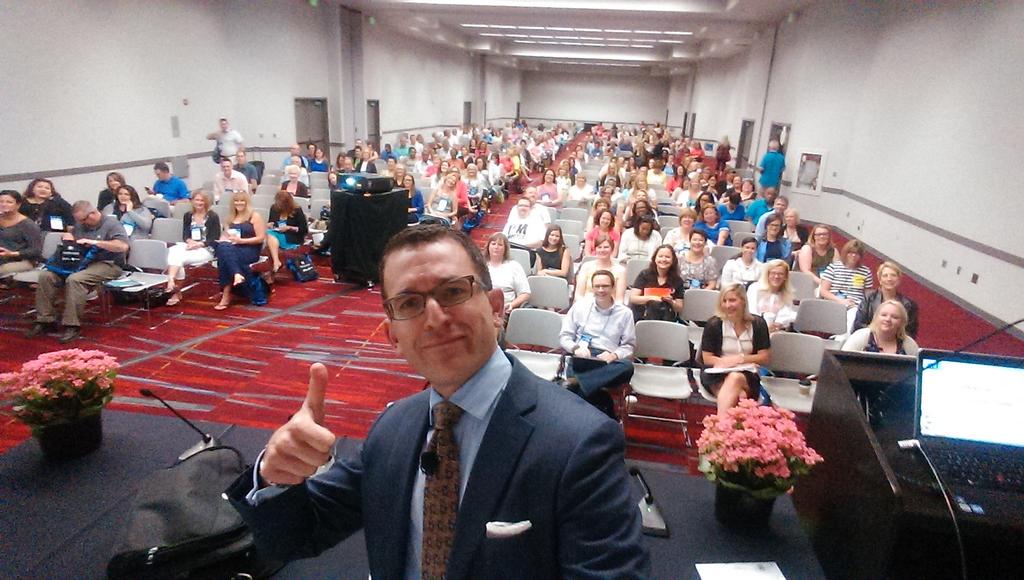 Hey lawyer! Drop the selfie stick and slowly back away…

Somewhere between the time that I took this selfie at the start of my FMLA/ADA session at the 2015 SHRM Annual Conference, and a few minutes later when the laptop with my PPT lost power (so, right when my heart sank and I openly wept), the US Department of Labor decided it was time to propose some new overtime rules.

What can I say? The gods of good timing really pissed in my Cheerios yesterday.

(Special shout-out to the SHRM IT support team that had me up and running again with a minute, and to the awesome SHRM audience that never lost faith in the kid).

Here’s a brief recap of the proposed OT rule change:

The BIG change: The DOL proposes that the minimum weekly salary to qualify for an exemption under the Fair Labor Standards Act be set at $921 per week ($47,892 annually). That will increase in 2016 to about $970 a week ($50,440 a year). Thereafter, the salary levels will adjust annually, without further rule-making, to the 40th percentile of weekly earnings for full-time salaried workers.

The potentially BIG change:  Salary alone is not enough to avoid the minimum wage and overtime rules. (Yes, some of you may need to re-read that last sentence. Now say, “D’oh!” and call the lawyer). That is, the employee’s primary duty has to be performing exempt job duties and responsibilities. “Primary duty,” explained here, is not a bright-line test. Rather, it’s a qualitative multi-factor analysis and varies from case to case. That said, there’s a well-developed body of case law. In its proposed rule, the DOL seeks comment on whether to adjust the test to something more quantitative; i.e., requiring that a certain percentage of an employee’s time be spent performing an exempt primary duty.

These potential changes, along with a few others, are in the resources I cut and pasted below from the DOL’s website.

How can employers prepare for these changes?

There is a 60-day public comment period on the proposed changes to the overtime regulations. It’s safe to say that the proposed new salary test won’t vary much, if at all, between now and the final rule. With that in mind, you have several options if the BIG change takes effect:

And, last, but not least: audit. Regardless of what you do to wages, it’s time to review those job descriptions and employee classifications. Get input from your managers to make sure that the job descriptions are reflective of duties actually performed. Additionally, make sure that your independent contractors are really “independent contractors” and not misclassified employees.  Further, in the event that the primary-duty test does eventually get modified, start thinking about whether some of the non-exempt duties that your otherwise exempt employees perform can be reassigned to other non-exempt employees.

The FLSA is fertile ground for litigation — class-action litigation. With the media spotlight shining on the new OT rules, your employees are going to be more in tune with exploring their legal rights. So, strongly consider using an employment lawyer to help you wade through some of these issues.