[After publishing this post, I was contacted by counsel for the City of Charlotte. It seems that some of the facts in both this post and the underlying reports upon which I based this post don’t tell the full story. So is this … (pause) … “Fake News”?!? Here is a follow-up post I ran based on the information the City attorney provided me.]

Though I’m not holding out for my own $1.5M payday, I hope that merely blogging about this Facebook fiasco can net me something close. I’m pretty sure that’s how it works.

Oh, who am I kidding? I’d settle for a Spam sandwich with extra mayo.

Back in August 2014, a white police officer in Ferguson, Missouri shot and killed a black man. That shooting quickly led to a series of protests and riots, which then landed Ferguson and race relations on the front page of most leading news publications across the country.

With my own social media feeds blowing up, more generally, the Internet’s hinges were being tested against the constant flow of polarizing Ferguson discussion. Fortunately, although strong feelings fueled the debate, most of the discourse was respectful.

Except when it wasn’t.

For example, a client called me frantic with a Ferguson-cum-Facebook social media issue. One of the client’s employees was being anything but respectful. Indeed, any objective person would have described the employee’s online speech as “racist.”

So, what did we do? I told the client to schedule a meeting with the employee. At the meeting, the client would ask whether the employee was the author of the Facebook posts. Then one of two things would happen:

What can I say? I have a short fuse for this stuff.

Something similar happened in Charlotte in August 2014. That is, an employee — a firefighter with the City of Charlotte — shared her strong feelings on Facebook about what was going in Ferguson: 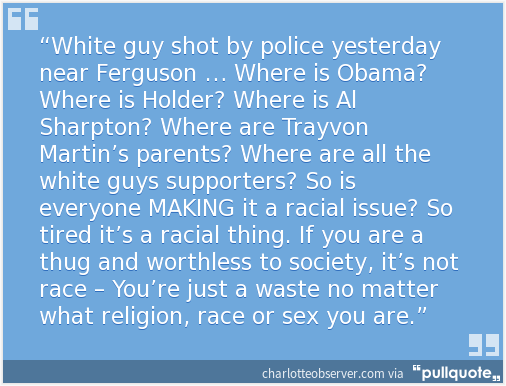 So, what do you guys think of this post? Is it respectful? Is it racist? Somewhere in between? Bad enough to lose one’s job?

After this post, the City of Charlotte fired the firefighter. But, apparently, the firefighter had previously spoken with her employer and questioned the safety of construction work at a new office building. So, she sued the City of Charlotte, claiming that her employer’s reason for firing her (the Facebook post) was a mere pretext for the real reason she was fired (complaining about safety issues).

Last week, a jury agreed with the plaintiff and awarded her $1.5 million.

And, check this out. According to Steve Harrison reporting here at The Charlotte Observer, the jury’s focus was whether the employee has a right to say what she did: 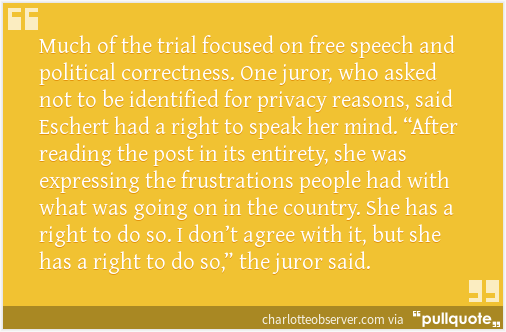 Bad speech and bad timing can lead to a good jury award — even in the private sector.

Now, remember something. The Charlotte case involves a public-sector employer. First Amendment issues count for something there.

Conversely, in the private sector, there is no such thing as freedom of speech. So, a private-sector employee does not have the “right” to say whatever she wants online … and keep her job. Except, when she can. That is, good luck convincing a jury — laypersons conditioned to freedom of speech as a bedrock principle of this country — that it no longer counts for something just because an employee handbook says otherwise. It’s even more difficult to pull this off when the employee is using Facebook outside of work.

Also, timing matters. Whatever the seemingly legitimate reason for terminating an employee — a Facebook post or otherwise — if a reasonable person could conclude that it’s a pretext for engaging in a protected activity (e.g., a prior complaint about discrimination), you’ve got problems.

So, what’s an employer to do?

Does the Charlotte firefighter verdict change how I would have advised my client? Heck no! The alternative is unacceptable: knowing about a racist employee and giving that employee’s racism the opportunity to infect the workplace.

However, even when the employee’s speech is less severe and closer to DEFCON 4 or 5 than 1 or 2, you need this consider timing and other inconsistencies. These may later create an issue for the jury to resolve. And, if that happens, you may need to have your checkbook ready. Just ask

Just ask the City of Charlotte.