Stick a fork in ’em.

Less than six months ago, federal contractors were clutching their pearls over the prospect of having to publicly disclose violations under 14 federal workplace laws, to be eligible for a government contract. The following month, in October 2016, a federal judge iced those “blacklisting rules” with a nationwide injunction.

Now, it appears as though President Trump will put the permanent kibosh on Barack Obama’s Fair Pay and Safe Workplaces Executive Order. 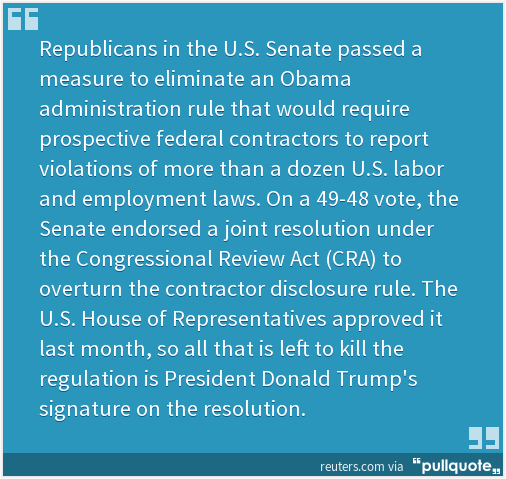 In the hours leading up to the Senate vote, Massachusetts Senator Elizabeth Warren (D) issued this report, in which she touts that “66 of the federal government’s 100 largest contractors have been caught breaking federal wage and hour laws, and more than a third of the 100 largest penalties levied by the Occupational Safety and Health Administration (OSHA) since 2015 were issued to companies that held federal contracts.”

Then you have the U.S. Chamber of Commerce, a staunch opponent of the blacklisting rules, which has emphasized how the rules force federal contractors to disclose “mere allegations of federal labor violations, potentially locking them out of federal contracts without giving them a chance to challenge the charges.” Indeed, as I’ve blogged before, under the “blacklisting rules,” a “violation” includes administrative merits determinations (e.g., a letter of determination from the EEOC that reasonable cause exists to believe that an unlawful employment practice has occurred or is occurring; a DOL letter indicating that an investigation disclosed a violation of the FLSA; or a complaint issued by any Regional Director of the NLRB), arbitration awards and civil judgments.

While it’s not a slam dunk that President Trump will sign the resolution, consider that Barack Obama signed the Executive Order, Senator Warren is an ardent support of the rules, and the Senate voted along party lines to place the measure before President Trump.