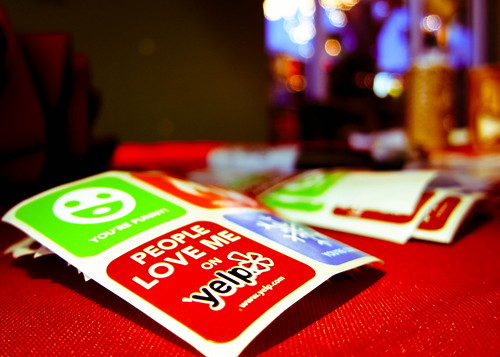 (See what I did there? We’ll get to the Lady Murderface part soon enough).

On Sunday, may Google Alert for “Fired AND Facebook OR Twitter” yielded several related stories that scratched my itch:

Clickbait. So much clickbait.

Each story links to the tale of a Yelp employee known as “Talia Jane.” On Friday, Ms. Jane (not her real name), posted a blog post on Medium entitled, “An Open Letter to My CEO.” The CEO in question is Yelp CEO, Jeremy Stoppelman.

In her blog post, Ms. Jane describes herself as “25-years old, balancing all sorts of debt,” suggest ways in which Yelp can put more money in her pocket, but not without calling out Yelp’s CEO:

[Y]ou can let customers choose a donation amount during checkout and divide those proceeds among your employees who spend more than 60% of their income on rent? The ideal percent is 30%. As I said, I spend 80%. What do you spend 80% of your income on? I hear your net worth is somewhere between $111 million and $222 million. That’s a whole lotta rice.

Originally, I suggested that Eat24 offer special coupon codes where half of the code’s value ($1) goes to charity. Maybe instead, you can give half the code’s value ($1) to helping employees who live across the bay pay their transit fares? Mine are $226 monthly. According to this website, you’ve got a pretty nice house in the east bay. Have you ever been stranded inside a CVS because you can’t afford to get to work? How much do you pay your gardeners to keep that lawn and lovely backyard looking so neat?

Murder Was The Case That She Gave Yelp.

Each of the reports linked above state that Ms. Jane lost her job on Friday. According to the Quartz story, Yelp would not comment on the reason for the separation of employment. Ms. Jane told Quartz in an email that the human resources department informed her the “letter violated Yelp’s Terms of Conduct and for that reason, they (Yelp/Eat24) had to ‘separate’ from me.” And, here are some tweets (1, 2 3) from Ms. Jane addressing the sequence of events.

might lose my job for this so it'd be cool if u shared so i could go out in a blaze of…..people knowing why i got fired?

google says my work email address doesn't exist, which means i have officially been fired from Yelp/Eat24 for writing this.

i'm on the phone with HR going over my severance now.

The public responses to Ms. Jane’s post and the subsequent loss of employment range from “sympathy” to “typical entitled millennial.”

But, regardless of where you come out on Ms. Jane’s predicament, the pertinent issue for this post is whether Yelp did the right thing. First, should Yelp have been concerned with Ms. Jane’s free speech rights? Well, since we’re dealing with private-sector employment, they don’t exist. Period.

Second, what about protected concerted activity? That is, the National Labor Relations Act allows employees to discuss the terms and conditions of employment with one another without fear of reprisal. Generally, however, there’s nothing concerted about one person griping about working conditions. So, that won’t work here.

Ultimately, it was poor judgment that doomed her.

Yeah, Ms. Jane showed incredibly poor judgment by calling out her company and CEO on social media. Well, that and commenting on customer relations is a bad move too. Plus — I’ve buried the lede long enough — scroll back up to her tweets. She identifies herself on Twitter as “Lady Murderface.”

None of the linked stories make a big thing about this. But, when it comes to Lady Murderface, call me old fashioned. I don’t know about you guys, but, unless I’m recruiting for Don Corleone, I’m going to pass on hiring someone whose name involves a capital crime and her face.

Would I fire a current employee whom I learned referred to herself on Twitter as “Lady Murderface?” Probably not. But, given everything else going on here, there’s that poor judgment thing again, I can see why Ms. Jane is out of a job.