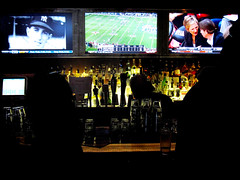 I’m not aware of any studies or surveys that the Sandbar Mexican Grill conducted on this subject. Instead, I imagine something like this:

Sandbar Manager: “Sure. But before I seat you, do you see that bartender over there? She’s *gasp* pregnant. That’s why we have her behind the bar, instead of in your face distracting you from watching the Arizona Cardinals, losers of eight in a row. Given that it’s Football Sunday, we even raised the bar an extra foot just in case her fetus is sitting high. And, as an extra precaution, we have a curtain between the bar and the employee bathroom so that you won’t have to avert your eyes should nature call. We used to have a bucket behind the bar for her, but our lawyers frowned on that. Really, what am I saying is, should we just fire her? Uh, fellas?!? Come back! I’ll make the other servers pee on sticks. Don’t run away! I assure you, it’s EPT; not that ClearBlue crap! Come one guys! Half-price Vodka/Rock Stars! Fellas!

Anyway, I gather that when the EEOC sued the Sandbar for pregnancy discrimination on behalf of a waitress whom the Sandbar had fired, the EEOC wasn’t all that concerned with anecdotal or scientific evidence concerning customer preferences. That’s the sense I got from this EEOC press release. Rather, the EEOC believed that the waitress was fired because she was pregnant — as opposed to the Sandbar having a legitimate business reason.

So, is it legal to fire a female bartender at a sports bar because customers supposedly prefer their waitresses without baby bumps? Probably not, as we know from the Handbook’s transparent attempt to boost SEO hard-hitting two-part exposé covering the Wild Beaver Saloon.

But, a definitive answer will have to wait for another day. Wisely, the Sandbar, where “Shiturday” is just a dream, but kids eat free on Monday, settled with the EEOC.