There’s not a whole lot that we have in common. I’m more erudite (you know, the blog thing), better looking, and more arrogant confident.

Given our differences, what I’m about to say may come as a surprise: when I was a associate attorney, I discussed salaries with other associates.

(I’ll pause as the shock dissipates). 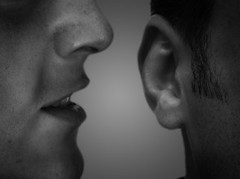 In my law-firm experience, discussing salaries ranks right up there with death and taxes. Over at EFCAblog.com — you may want to update that URL, dudes — Daniel Schudroff writes here about a small-firm associate who claimed that she was fired in violation of the National Labor Relations Act for discussing wages with co-worker.

The Act prohibits covered employers — union and non-union — from taking any action that would chill employee discussion of wages and benefits. However, supervisors are not protected. And in The Martin Law Group, 10-CA-078395 (Div. Judges May 6, 2013), an administrative law judge determined that the associate was actually a statutory supervisor. Therefore, she had no protection under the Act, and even if her employer had fired her for discussing wages, she had no recourse under the Act.

The administrative law judge found that the associate was a supervisor for a number of reasons. First, the judge noted the firm’s managing partner, without further investigation, ratified the associate’s recommendation to terminate an employee. The administrative law judge also explained the associate responsibly directed a case manager to assist the associate in handling the associate’s cases. The ALJ noted, however, that a small law firm — where all attorneys were lead counsel on their own cases — would differ from, for example, “a legal services agency employing a large number of staff attorneys who work under multiple layers of supervision.”

I’m gonna go out on a limb here and say that this case will not spell the end of salary discussions at law firms — small or large.