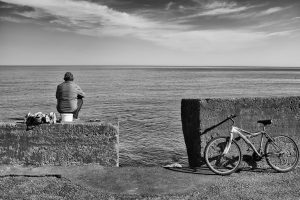 I imagine that, among the reasons that victims fear complaining about sexual harassment, is that spotlight may shine a little too brightly on them.

For example, when a plaintiff in a Title VII case claims emotional distress from sexual harassment, the source(s) of that pain will be under the microscope. Questioning on this issue could spill into the plaintiff’s social media activities.

But how far will a court allow this to go?

In Marsteller v. Butterfield 8 Stamford LLC (opinion here), the plaintiff alleged that two of the defendants, both employees of the other defendants, repeatedly sexually harassed her, watched her changing her clothes on a company security camera in a private office, and showed the video of her changing
clothes to other employees of defendants. Consequently, the plaintiff claimed to have “severe emotional distress” as a result of this conduct.

The defendants sought to obtain medical records relating to the severe emotional distress, and the court allowed that.

However, the defendants also tried to compel the plaintiff to provide them with direct access to her social media accounts so that they could ascertain for themselves whether the plaintiff had other information relating to her claims and the incident outlined above.

Now, it should be obvious that carte blanche access to a party’s social media is generally considered a fishing expedition, which courts don’t allow. And the situation here was no different:

Requiring plaintiff to provide her social media passwords to defendants would constitute a wholesale invasion of her privacy, and would be far outside the bounds of proportionality. One can hardly imagine a better example of a fishing expedition.

However, the court also noted that “the mere fact that social media was the method of communication used, rather than a handwritten letter or email, does not insulate relevant materials from disclosure in discovery.” Thus, where relevant information can be found online, it’s fair game, as long as the request is narrowly tailored:

Defendants’ alternative request for copies of social media materials responsive to the cited requests for production, however, is reasonable and likely to lead to admissible evidence.  As noted above, the requests actually cited in the motion seek [and the Court will allow defendants to obtain discovery on] “statements … of any and all witnesses to the Incident(s) described in the Complaint” and “communications, including, but not limited to, emails, text messages, regarding or relating to the Incident as alleged in the Complaint.”

You may be thinking yourself, “Why didn’t the defendants seek discovery on social media of the plaintiff’s mental or emotional state?” Well, they tried. Except, they were too late.

The court’s opinion suggested that would have been fair game. Indeed, other courts have permitted it and it’s standard for me in cases I’m defending.