Welcome to The Employer Handbook.

Extending the fifteen minutes of fame of a trash-talking blogger/teacher by a 300 word blog post.

Dudes, do you remember Natalie Munroe?

She’s the teacher who enjoyed a cup of coffee in the spotlight a few years ago after getting suspended for bashing her students on her personal blog. 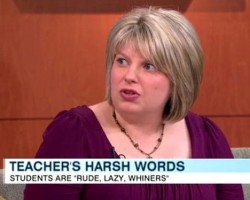 Among other things, she described her students as argumentative f*cks who may engage in Columbine-style shootings.

Out of all this, back in June of 2012, she sued her employer, alleging that her employer deprived her of First Amendment constitutional rights.

Free speech rights to call her students “utterly loathsome in all imaginable ways.” We’ll see about that…

“Within certain blog posts are occasional passages that touch upon broad issues of academic integrity, the value of honor, and students’ lack of effort. Each of these topics is a matter of political and social concern, despite the strong language Plaintiff used. However, context matters….Whatever public concern she occasionally touched on is subsumed by personal invective; the blog’s “overall thrust” devalues the discussion of public issues.

Defendants were within their rights to conclude that the blog posts would erode the necessary trust and respect between Munroe and her students….Here, Munroe’s blog contains gratuitously demeaning and insulting language inextricably intertwined with her occasional discussions of public issues…attracted considerable negative attention, from concerned parents and from the public at large. Upon consideration of the entire record, the Court concludes that Defendants did not violate Plaintiffs’ constitutional right to free expression.”

As I’ve said before — at least I believe I’ve said it before, it’s a little late and I’m a little too lazy to look this up right now — there is no such thing as First Amendment online protections for employees in the private sector. So, even if this case had come out differently, it would not apply to most workplaces throughout the country.

But in the public sector, this case highlights that the First Amendment does not protect mean-spirited online speech about matters of personal concern (i.e., trash talking).