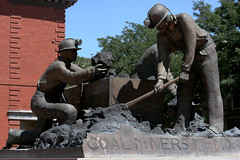 What does this bill say (CliffsNotes version)? And what are the chances of passage? Find out after the jump…

The Mine Safety and Health Act currently requires the Mine Safety and Health Administration (MSHA) to inspect surface mines at least twice a year and underground mines at least four times a year (seasonal or intermittent operations are inspected less frequently). The stated purpose of the Byrd Act is to improve compliance with mine and occupational safety and health laws, empower workers to raise safety concerns, prevent future mine and other workplace tragedies, and establish rights of families of victims of workplace accidents, and for other purposes.

According to this Rockefeller press release, the Byrd Act contains five new provisions:

These new provisions are aimed at fixing safety issues revealed in the wake of the Upper Big Branch mine disaster, which claimed the lives of 29 miners in Montcoal, West Virginia.

The bill’s co-sponsors are Sens. Tom Harkin (D-Iowa), Patty Murray (D-Wash.) and Joe Manchin (D-W.Va.). According to this post from Bem Geman at TheHill.com, House GOP appropriators are trying to block the bill, alleging it would harm the coal industry and the economy.