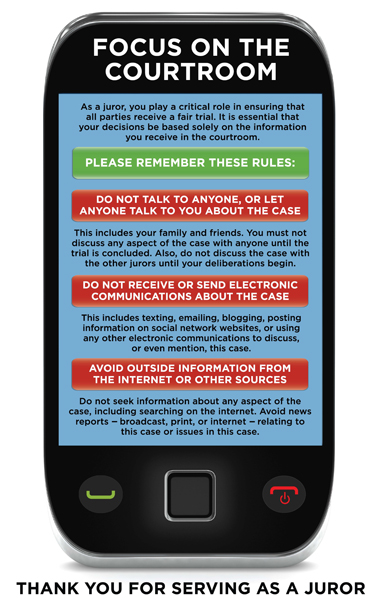 If When “Facebookutioner” catches on, you read it here first.

But seriously folks, let’s talk about what judges are doing about jury use of social media during trial…

According to this survey, in which 508 federal judges completed questionnaires, only 30 respondents (5.9%) are aware of instances in which jurors have used social media during trial or deliberation.

What is the social network of choice among those who disregard jury instructions not to use social media during trial and deliberations? No surprise, it’s Facebook. Although Google+ is apparently used as just as often. Who knew?

Three judges reported that a juror “friended” or attempted to friend a trial participant on Facebook. Three judges also reported that jurors used social media to post information about a deliberation. For those who get caught using social media during trial and deliberations, the punishment is generally a warning or removal from the jury. However, four judges did declare a mistrial.

Gosh, what would happen if I became a juror? No posts at the The Employer Handbook?!? Your email and rss feed subscriptions to this blog would be worthless. And no witty tweets?!? No Facebook Fan Page or LinkedIn updates?!?

Remain faithful. Don’t you cheat on me! Wait for me!