Often on this blog, I write about employees who lose their jobs for doing dumb stuff on social media — like the one-time Associate General Counsel and HR Director who live-streamed himself on Instagram from the Capitol riots. I’ve got slide decks full of this stuff from HR conferences I’ve presented over the years.

So, when I read that an employee of a grooming products company in England tweeted that a customer was a ‘t**t’ and a ‘f*****g w****r,’ my first impulse is to insert another PowerPoint slide.

Boy, was I wrong!

(I’m also secretly proud of myself for knowing what the asterisked words were in these reports about the incident from the Daily Mail (here) and The Sun (here) without reviewing the uncensored tweet.)

Both the Daily Mail and The Sun describe how the company came to the defense of the employee, known as Maiden Sarah.

To set the stage, on January 4, the company tweeted that it would no longer ship retail orders to the EU due to Brexit. A potential customer tweeted back that the company should relocate to Ireland. That was enough to raise the ire of Maiden Sarah, who fired off this inflammatory tweet. Subsequently, someone else emailed Maiden Sarah’s boss to try to get her fired.

Check out the company’s response below, which has since received about 32,000 likes. Dayum! 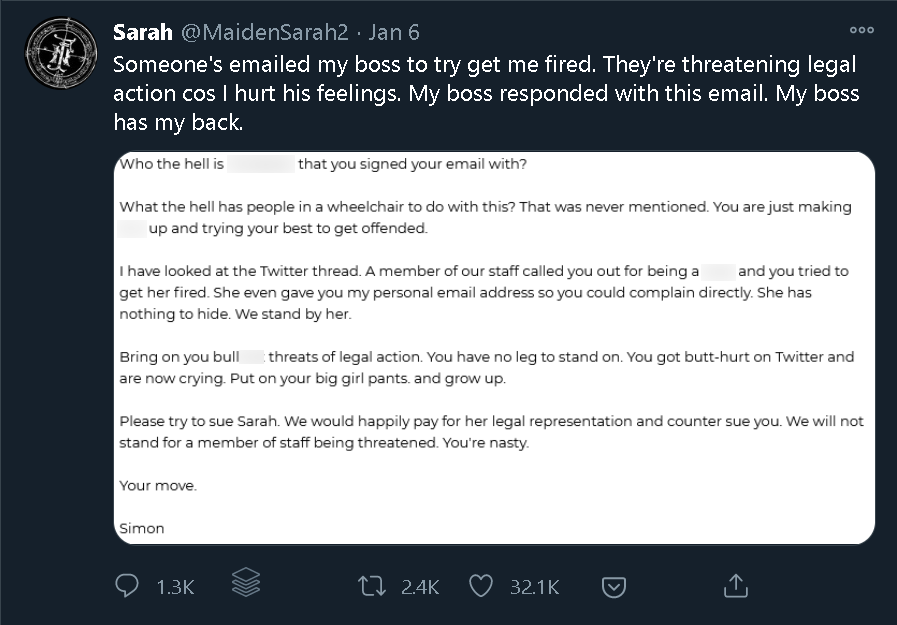 Twitter users showered Simon, the author of the company email, with praise. You can check out the Daily Mail story if you want to read those tweets.

Do I condone Maiden Sarah’s behavior? Not really. Well, not unless we’re in the same room because I’m concerned that she could kick my you-know-what.

You, too, may disagree with how the company and its employee responded to a disgruntled customer.

But, it’s nice to break up the monotony of a seemingly endless string of social media-related employee firings with a company that backs its workers instead.