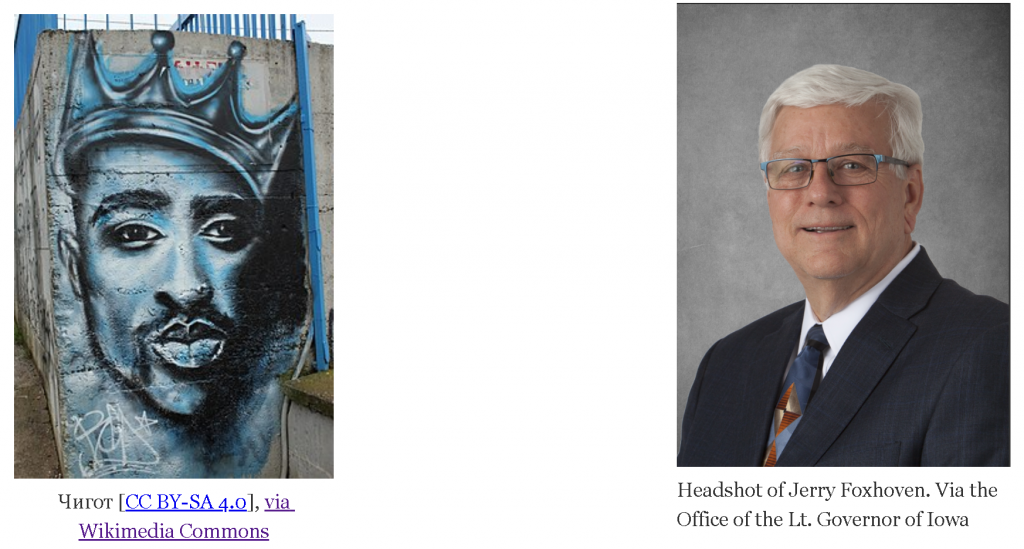 When you have a Google Alert for “Fired” and “Facebook,” sometimes, you really have to get through a lot of chaff before you find the wheat.

Over the past few days, I’ve had to sift through:

But, yesterday, I struck gold!

Ryan Foley at the Associated Press reported here that the Iowa Department of Human Services Director was into Tupac. Like really into Tupac:

[He] hosted weekly “Tupac Fridays” to play his music in the office. He traded lyrics with employees and he marked his own 65th birthday with Shakur-themed cookies, including ones decorated with the words “Thug life.”

Then there were the emails…

The agency released 350 pages of emails with the words “Tupac” or “2Pac” sent to and from [the Iowa Department of Human Services Director] during his two-year tenure in response to an AP request. They show that [the Iowa Department of Human Services Director] marked the anniversary of Shakur’s death, shared one of his lyrics about love on Valentine’s Day and used the rapper’s image to try to improve the agency’s culture. He told colleagues he was inspired by lyrics that included: “It’s time for us as a people to start makin’ some changes.”

But did he send one Tupac email too many?  According to the AP and others, just before Father’s Day, the Iowa Department of Human Services Director emailed 4,300 co-workers about Tupac. In the email, the Human Services Director included an inspirational quote from Tupac and thanked co-workers for the “absolute honor to lead such a dedicated and committed group of people.”

So was this superfan fired because of his ourspoken love for Tupac’s rap game?

As it turns out, no. He resigned. And according to Beau Bowman reporting here at KCCI Des Moines CBS 8, Tupac didn’t factor into that decision:

Iowa Gov. Kim Reynolds said Thursday through a spokesman that the resignation of former Iowa Department of Human Services Director … had nothing to do with his apparent obsession with the late rapper Tupac Shakur.

“As the Governor has said, a lot of factors contributed to the resignation of [the former Iowa Department of Human Services Director] and now Gov. Reynolds is looking forward to taking DHS in a new direction. Of course Tupac was not one of them.” -Pat Garrett, governor’s office spokesman.

So, unfortunately, it looks like a court won’t get to explore whether discrimination based on one’s love for Tupac is unlawful.

(I don’t support it. Although, I’m pretty sure that’s not unlawful. Just a hunch.)

Now, firing a Biggie superfan however — that would make for one juicy lawsuit.