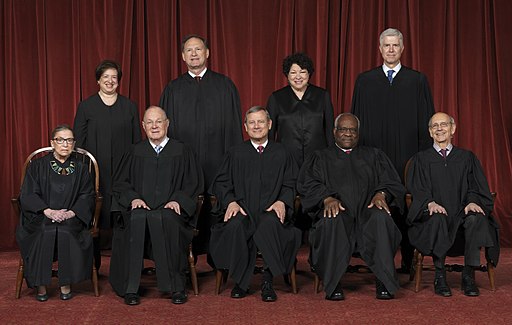 By Photograph by Franz Jantzen, Collection of the Supreme Court of the United States [Public domain], via Wikimedia Commons

Sure, I can do that for you.

Those arbitration agreements that some of you ask employees to sign — the ones in which they waive the right to assert class-action claims. It turns out that they are worth way more than the paper on which they are printed.

Yesterday, in a 5-4 decision delivered by Justice Neil Gorsuch, the Supreme Court held that companies can require workers to arbitrate employment claims alone.

Ok, now give me some background on this case, Eric.

The Federal Arbitration Act permits parties not only to arbitrate claims but to limit the scope and breadth of the proceedings. The National Labor Relations Act  permits workers to “engage in other concerted activities for the purpose of collective bargaining or other mutual aid or protection.” Put differently, employees can come together to address working conditions, such as wages.

The question before the Supreme Court was which law, the FAA or the NLRA, trumps the other?

So, Eric, which law reigns supreme? The FAA or the NLRA?

Care to explain why the FAA trumps the NLRA?

Sure. I’ll quote liberally from the Court’s opinion:

The parties before us contracted for arbitration. They proceeded to specify the rules that would govern their arbitrations, indicating their intention to use individualized rather than class or collective action procedures. And this much the Arbitration Act seems to protect pretty absolutely….[Conversely, the] NLRA secures to employees rights to organize unions and bargain collectively, but it says nothing about how judges and arbitrators must try legal disputes that leave the workplace and enter the courtroom or arbitral forum. This Court has never read a right to class actions into the NLRA—and for three quarters of a century neither did the National Labor Relations Board.

But Congress passed the NLRA after it passed the FAA. Shouldn’t that count for something?

Here’s what the majority had to say about that:

When confronted with two Acts of Congress allegedly touching on the same topic, this Court is not at “liberty to pick and choose among congressional enactments” and must instead strive “‘to give effect to both.’”

Union organization and collective bargaining in the workplace are the bread and butter of the NLRA, while the particulars of dispute resolution procedures in Article III courts or arbitration proceedings are usually left to other statutes and rules— not least the Federal Rules of Civil Procedure, the Arbitration Act, and the FLSA. It’s more than a little doubtful that Congress would have tucked into the mousehole of Section 7’s catchall term an elephant that tramples the work done by these other laws; flattens the parties’ contracted-for dispute resolution procedures; and seats the Board as supreme superintendent of claims arising under a statute it doesn’t even administer.

Did Justice Ginsburg open up a can of you-know-what on the majority?

As I see it, in relatively recent years, the Court’s Arbitration Act decisions have taken many wrong turns. Yet, even accepting the Court’s decisions as they are, nothing compels the destructive result the Court reaches today.

The inevitable result of today’s decision will be the underenforcement of federal and state statutes designed to advance the well-being of vulnerable workers….If employers can stave off collective employment litigation aimed at obtaining redress for wage and hours infractions, the enforcement gap is almost certain to widen. Expenses entailed in mounting individual claims will often far outweigh potential recoveries.

Eric, read your tea leaves for us. How might this Supreme Court decide other employment law cases where public opinion may have evolved from the letter of the law?

The late Dennis Green, former head coach of the Arizona Cardinals, had an infamous press conference in which he carried on about how the Chicago Bears performed exactly how he thought they would. Similarly, most Supreme Court pundits anticipated that Justice Gorsuch would prove to be both conservative and a textualist; i.e., someone who sticks to the letter of the law without reading too much into it.

Yesterday, we got just that.

Here’s the money shot from Justice Gorsuch, “Allowing judges to pick and choose between statutes risks transforming them from expounders of what the law is into policymakers choosing what the law should be.”

So, now consider something like Title VII and whether sexual orientation is a form of sex discrimination. Clearly, that wasn’t on the mind of drafters of the bill. Still, the growing trend in the federal courts, one with which I agree as a matter of law, is to conclude that sexual orientation discrimination is a form of sex stereotyping, and therefore unlawful under Title VII.

Yesterday’s opinion leaves little doubt for me as to how Justice Gorsuch would decide a case like that.

Eric, before you go, if we haven’t already asked employees to sign arbitration agreements with class action waivers, should we start now?

On the one hand, there’s Justice Ginsburg’s take. Plus, it can be pretty daunting to have to defend a class action where the total damages dwarf those of any single litigant. That poker game may induce an employer to fold or settle as the case may be. Plus, arbitration means no jury and less publicity.

Then again, there’s the “Death by a Thousand Paper Cuts” theory that forcing employees to arbitrate claims individually could become very expensive to defend if there are enough motivated claimants who wish to pursue their claims individually. Plus, it’s very difficult to appeal an arbitration decision.

So, yeah, it depends.