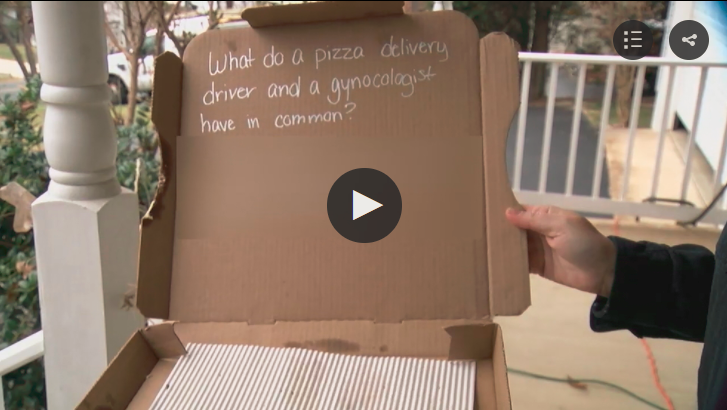 You were expecting a different start to 2018 at The Employer Handbook?

I adore that subheader. But, I can’t take credit for it. It comes from a UK tabloid. (We may have won the Revolutionary War, but the Brits still win the headline battles.) The tabloid story is about, well, res ipsa loquitor.

For a more PG-13 version of the story, I’ll send you over to this report from The Huffington Post. Below are the details: 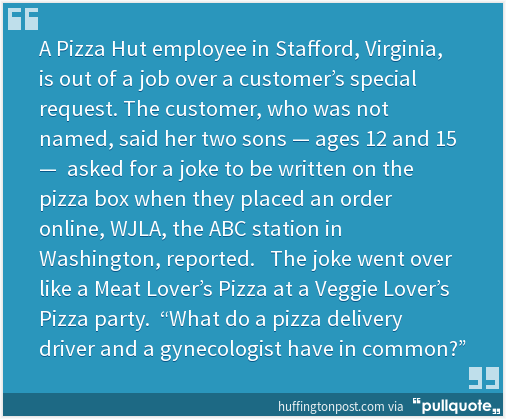 [And here is the saucy punchline.]

According to the report, the offended customer posted a screenshot of the pizza box on social media and complained to Pizza Hut. For what it’s worth, the “joking” employee apologized and the customer did not want the employee to be fired. While what happened next rubbed some Pizza Hut customers and potential patrons the wrong way, the employee was fired.

Should the employee have lost her job over this?

Remember, it’s all in the eye of the beholder.

Let’s change the facts around a bit. Imagine two co-workers standing around the proverbial watercooler. (Millenials can click here for assistance.) Employee A asks Employee B to tell a joke. Employee B responds with a saucy one that offends Employee A. Is Employee B immune from discipline because Employee A requested a joke without placing any sort of restriction(s) on joke content?

Clearly, the answer is no.

That’s because the rules of the workplace — I’ll wait patiently while you pull out your employee handbook — don’t allow that type of behavior.

But, beyond that, the law doesn’t give two you-know-whats about the intent of the person who is making the joke. Rather, all that matters is the impact on the “victim.”

Sure, there are degrees of bad and other mitigating factors. In a courtroom, there are many considerations as to what may constitute a hostile work environment. Telling a sexual joke is not as severe as touching a co-worker in a sexual manner. Plus, when the victim requests a joke — especially if he or she asks to hear a saucy joke — the law considers the actual impact that the joke has on that person. Another “legal” factor is how offended a “reasonable person” standing in the victim’s shoes would be.

But, your business probably isn’t too keen on exploring what may or may not create a hostile work environment, especially if it means defending a lawsuit.

So, remind your employees that one saucy joke, whether to a co-worker or customer — even if by request — is too much.