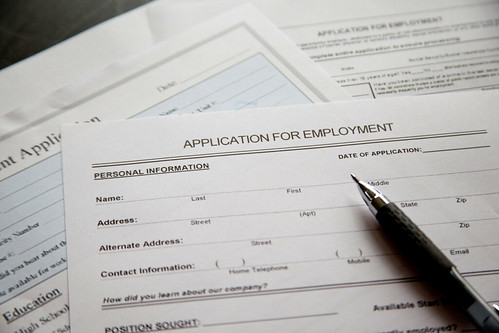 There is a growing trend across the country for employers to remove job-application questions about criminal-record history. Ban the Box notwithstanding, other common job application no-no’s continue to trip up certain employers.

For example, last week, the EEOC announced (here) that it had settled a discrimination complaint filed under the Americans with Disabilities Act against a North Carolina temp agency. Here’s the what the EEOC claimed that the temp agency did wrong:

According to EEOC’s complaint in the lawsuit, Nicole Bullard applied for employment with Two Hawk in May 2013. Bullard was required to fill out a medical history form during the application process. The complaint states that the form asked Bullard to identify medical conditions she has or had in the past, as well as to disclose whether she was taking any medications that might affect her ability to perform the essential functions of the job she sought. The form further asked Bullard to state whether she had physical or mental conditions that require accommodation, and whether she had any restrictions in activity. EEOC’s complaint indicates that in response to the application’s questions, Bullard disclosed that she was taking two prescription medications.

Thereafter, EEOC said, Bullard received a conditional job offer from Two Hawk. During her orientation for work, Bullard was questioned about her medications, and provided information in response to those questions. The following day, Bullard’s job offer was rescinded and Bullard was told she had not passed a “pre-screening test.” The questions asked during the application process, as well as the alleged refusal to hire Bullard due to the medical information she had disclosed, violate the Americans with Disabilities Act (ADA), according to EEOC.

If true, this is low-hanging fruit for the EEOC.

“The law is clear: employers cannot request any information that might disclose the existence of a disability during its initial application process,” said Lynette A. Barnes, regional attorney for EEOC’s Charlotte District. “Such information can only be requested after an applicant receives a legitimate job offer.”

If you have questions about the substance and timing of medically-related questions you may ask a job applicant, check out this EEOC resource. And, if it has been a while since you’ve audited your hiring/onboarding processes for ADA compliance (among other things), contact an employment lawyer for assistance.