Jeff Belmonte from Cuiabá, Brazil [CC BY 2.0], via Wikimedia Commons

The Family and Medical Leave Act provides eligible employees with up to 12 workweeks of job-protected leave during any 12-month period for specified family and medical reasons. But, if two spouses work for the same company, maybe, not so much.

That is, the two combined may be limited to 12 workweeks during any 12-month period if such leave is taken for:

Additionally, the aggregate number of workweeks of leave that both husband and wife may take under the FMLA to care for a servicemember may be limited to 26 workweeks during a 12-month period. And even less if leave is taken for other FMLA reasons during the same 12-month period.

But, a new bipartisan bill in Congress called the ‘‘Fair Access for Individuals to Receive Leave Act’’ or the ‘‘FAIR Leave Act’’ aims to change all that. It is sponsored by Senators Joni Ernst (R-IA), Mike Lee (R-UT), Kyrsten Sinema (D-AZ) and Tina Smith (D-MN).

Here’s more about it from a press release from Senator Ernst: 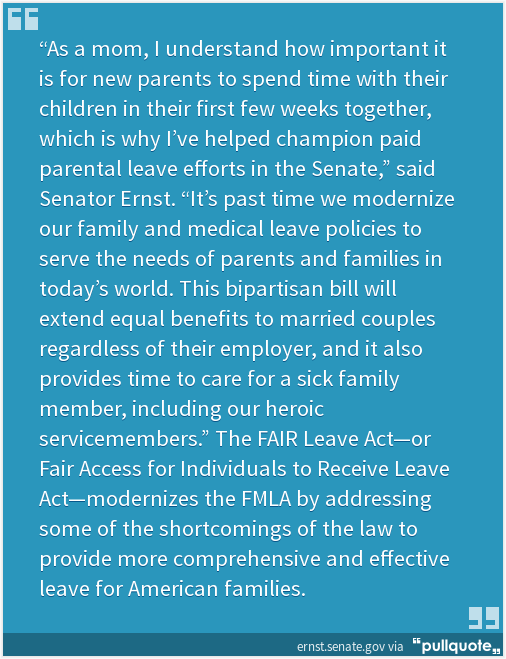 Quite simply, the legislation would strike the so-called marriage penalty from the FMLA. According to another press release from Senator Sinema, the FAIR Act is supported by the Bipartisan Policy Center, Military Officers Association of America, A Better Balance, National Partnership for Women & Families, Independent Women’s Forum, 1000 Days, PL+US, American Federation of Teachers, and NEA.

What do you think? Are we overdue for this change? Or could it place an unfair burden on those businesses that employ both spouses? Email me and let me know.

Have a nice weekend!