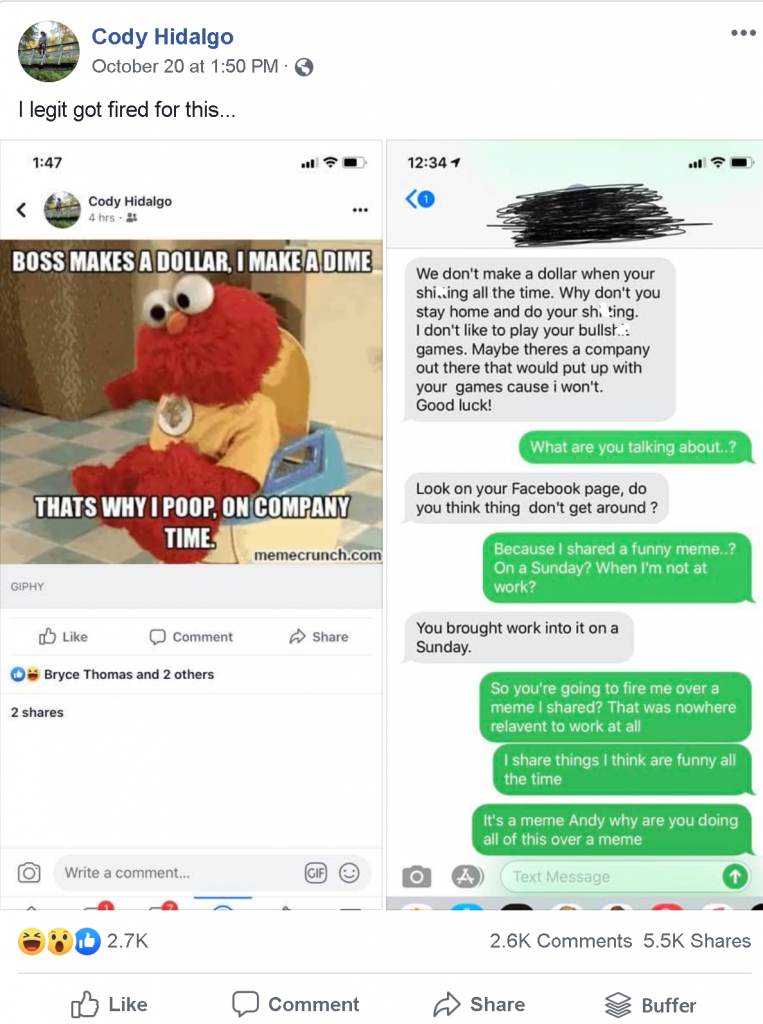 A Michigan man claims he “legit got fired” for posting a Sesame Street Elmo ‘poop’ meme on Facebook on a Sunday when he wasn’t at work. (h/t The Daily Dot and Unilad)

What is at-will employment?

The State of Montana is not down with at-will employment, except during an employee’s probationary period.

In the other 49 states, there are some exceptions to the at-will employment doctrine. For example, I can’t fire someone because of the color of his skin, the god to whom she prays, or any other ‘protected class’. That’s discrimination. I also cannot fire someone for complaining about discrimination. That’s retaliation. I’m pretty sure that it’s illegal in nearly all or all states to fire someone for refusing to engage in illegal activity.

There are a bunch of other exceptions too, but, generally speaking, unless you enter into a contract of employment with an employee for a specific term of employment, that employment relationship can end at any time, for any reason, with or without notice.

(Some states, like California and Colorado, for example, have ‘off duty conduct laws’ which forbid taking action against an employee for engaging in a legal activity outside of work. Posting poop memes is legal.)

So if, as the Michigan man claims, he “legit got fired” for posting a Sesame Street Elmo ‘poop’ meme on Facebook on a Sunday when he wasn’t at work, that’s perfectly legal — unless it’s somehow protected concerted activity. But that’s a post for another day and good luck with that anyway.

But, just because you can fire, doesn’t mean you should.

Because if you’re going to fire someone for a poop meme, it could get messy, especially if you are a small business.

I don’t know what percentage of the company’s business comes from online advertising and referrals, but check out the company’s Facebook page and Google reviews. Plus, these tweets won’t help the company much.

But, if you are going to fire, do it in person.

I offer this post as Exhibit A of why not to terminate an employee (allegedly) with a series of inflammatory text messages.