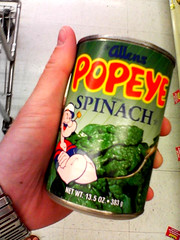 “Well, blow me down. Wimpy inspires a UK fast food chain,
and all I get is this crappy can. Why I oughta…“

In anticipation of the current flu season, you decided to mandate that all employees get immunized. The problem is that one of your employees, a vegan, who won’t ingest any animal or animal by-products — especially not the microwaveable scrapple-wrapped tripe pops I keep in the lunchroom freezer — refuses to get a flu shot because it’s against her religious and philosophical beliefs.

What’s her religion, you ask? Why veganism, of course.

WTH?!? Surely, you have no obligation to accommodate this “religion.” In fact, you suddenly have the urge to brush her teeth with my frozen pops.

Well, guess what, carnivore? If you fire the employee for not getting the shot, you may have a religious-discrimination claim on your hands.

So says an Ohio federal court in this recent decision. Indeed, an employer must accommodate an employee’s sincerely-held religious belief, unless doing so would pose an undue hardship to the employer. When considering whether veganism qualifies, the Ohio court emphasized that “whether or not a practice or belief is religious is not an issue. . .religious practices . . . include moral or ethical beliefs as to what is right and wrong which are sincerely held with the strength of religious views.” Plus, it didn’t hurt that the plaintiff quoted the scripture when requesting a flu-shot accommodation from her employer.

*** And I plan to quote Biggie Smalls at compensation time ***

Ultimately, the court accepted that an employee may subscribe to veganism with a sincerity equating that of traditional religious views. Consequently, in certain curcumstances, a vegan can avoid an otherwise mandated flu shot, unless it would post an undue hardship to the employee. But I’m thinking a surgical mask could solve that problem.

Now, if you’ll excuse me, somebody has a craving for thawing pops.

Me, that somebody is me.

UPDATE: If you’re a California vegan, you’re out of luck. As two readers noted on LinkedIn, in this case, a California Court of Appeal — yes California?!? — refused to recognize Veganism as a religion requiring accommodation under anti-discrimination laws. For more on the CA decision, go here and here.