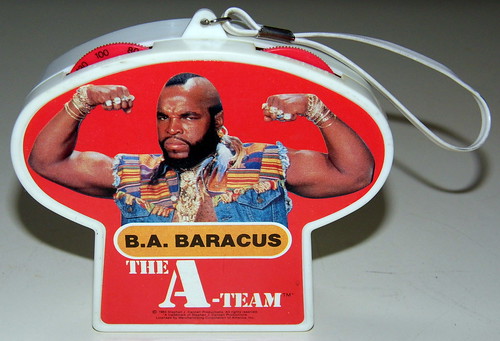 I had the gold, the overalls, the mohawk. People stopped me on the street to take their picture with me. Although, the highlight of the night was when I ran into someone dressed up as — wait for it — Hannibal Smith!

Where am I going with this? Ah, yes. While I tried my best to pull off Mr. T, there was never any risk of confusion. I was 160 pounds soaking wet, my “gold” was actually tin foil, and I’m white.

However, fast-forward 10 years. I’m a partner at a law firm. And I have a personal blog where I write about the law. *** Only in America *** So, as I advise my employer-clients to do with employees who blog and use other forms of social media to discuss work-related products and services, I include a disclaimer to alert readers that my opinions are mine and not my employer’s. In fact, this is a must in any good social media policy.

But should a social media policy also include language to the effect that the employer will not use an employee’s personal social media accounts to promote the employer’s business without permission? After the jump, a recent decision which makes a good argument for it…

The case is Maremont v. Susan Fredman Design Group. In this case, the plaintiff, an interior designer, worked as the Director of Marketing, Public Relations, and e-commerce for a prominent interior design company. During her tenure at SFDG, Maremont maintained that she became well-known in the Chicago design community, allowing her to create a popular personal following on Facebook and Twitter. Maremont also created a blog entitled “Designer Diaries: Tales from the Interior” that is hosted on SFDG’s blog. Maremont authored frequent posts and tweets to her personal Facebook and Twitter accounts, along with the material for the Designer Diaries blog. Maremont’s image appeared on each personal post and tweet.

Shortly before her four-year anniversary at SFDG, Maremont was involved in a terrible accident. During her time in the hospital, she learned that SFDG had impersonated her by publishing posts and tweets promoting SFDG on her personal Facebook and Twitter accounts. Maremont asked the company to stop, but it continued doing it anyway until she was able to change her account passwords. Maremont then sued under the Lanham Act. And SFDG promptly sought to dismiss the case, claiming that Maremont did not have a claim upon which relief could be based.

The Lanham Act makes it unlawful to falsely represent the origin, association or endorsement of goods or services through the wrongful use of another’s distinctive mark, name, trade dress or other device.

The court found that Maremont could pursue a claim under the Lanham Act. As a professional interior designer – she become well-known in the Chicago design community allowing her to create a popular personal following on Facebook and Twitter.

Maremont also alleged that her social networking activities related to her work in a commercial context, namely, as a professional interior designer and employee of SFDG. She further contended that she was engaged in the commercial marketing of her skills when SFDG wrongfully used her name and likeness by authoring tweets and posts under her name. As such, the court found that Maremont could have suffered a commercial injury based on her employer’s deceptive use of her name and likeliness.

Unfortunately for Maremont, the case was later dismissed after a failed appearance at a scheduled hearing. Go figure.

Don’t use or access employee’s personal social media accounts without the employee’s written permission. And, even then, don’t do it.